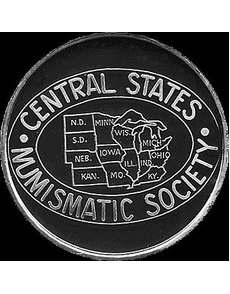 The reverse side of the 2012 medal will be the CSNS logo, as on all previous medals.

The Central States Numismatic Society is celebrating its 75th anniversary in 2014 with a special medal.

CSNS has marked its annual conventions with silver and bronze medals for decades.

For the 2014 medal, the society is launching a contest, open to CSNS members in good standing, for the best design. The winner gets his or her initials on the medal and a specially struck silver medal with the serial number “000.”

The obverse of the annual Central States convention medal usually honors the city where the convention is held — Schaumburg, Ill., in 2014. The 75th anniversary medal, however, will celebrate Central States’ diamond jubilee instead. The standard reverse will feature the CSNS logo.

• The competition is open to all CSNS members in good standing.

• The design shall be presented on plain paper, 8.5-inch by ll-inch size, within a 4-inch to 8-inch circle.

• The subject matter’s main theme should be depicted as large as the encompassing circle will allow. Supplementary wording can then be placed in any or all remaining open areas.

• The subject may be presented as a photograph, decal or penciled art layout, supported with or without pictures. Formal art is not necessary.

• The subject matter of the design should be relevant to CSNS’s 75th anniversary.

• Do not include your initials on the design. These will be added after the judging.

• The reverse side of the medal will be the CSNS logo, as on all previous medals.

• You may submit an explanation of your design.

• You may submit up to three different designs.

• If your entry is of private or commercial subject matter, written permission for use must be obtained from the appropriate authority. If permission is not granted, the design will be disqualified.

• All entries must be in the hands of the medal chairman by Jan. 31, 2013. Judging shall be by members appointed by the chairman.

• The winning design becomes the property of the Central States Numismatic Society. All others will be returned, on request.

• The Medal Committee reserves the right to modify the winning design to meet the requirements of the minting process.

• The winner will be awarded his/her prize at the 2014 CSNS awards breakfast.

Completed designs, or correspondence regarding the contest, should be sent to Medal Chairman Donald Young, 560 Marimon Ave., Harrodsburg, KY 40330. ¦