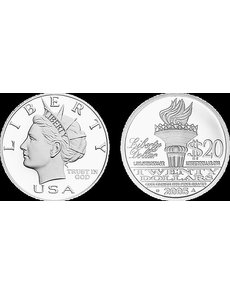 Bernard von NotHaus claims his Liberty Dollar medallions were not meant to be confused with circulating U.S. coinage or be considered current money. Von NotHaus has been awaiting sentencing on a 2011 conviction on counterfeiting and related charges associated with the Liberty Dollar.

Liberty Dollars will be banned from sale on the show bourse and from public display in numismatic exhibits at Central States Numismatic Society conventions starting in 2013.

CSNS officials on Dec. 17 said that the ban would begin at the society’s April 24 to 27 convention in Schaumburg, Ill.

Kevin Foley, the CSNS convention chairman, said the ban is based on the March 2011 federal conviction of Bernard von NotHaus, the creator of Liberty Dollars, and the determination by the Secret Service as the result of the trial that the Liberty Dollars are considered to be counterfeit.

Von NotHaus is awaiting sentencing for his conviction in U.S. District Court for the Western District of North Carolina, Statesville Division, on four charges related to the manufacture, promotion and sale of Liberty Dollars.

Von NotHaus introduced the Liberty Dollar precious metal medallions as a “private voluntary barter currency” in 1998 by creating the National Organization for the Repeal of the Federal Reserve Act and the Internal Revenue Code, more commonly known by its acronym NORFED.

NORFED was dissolved in December 2006, with the sale and promotion of Liberty Dollars continuing under the Liberty Services name.

“Although this alternative monetary instrument has been available on coin convention bourse floors since its 1998 introduction, and has from time to time been the subject of educational exhibit area displays, the 2011 federal court conviction of Mr. von Not-Haus in connection with his role as what one numismatic press outlet characterized as the ‘monetary architect’ of the Liberty Dollar on the basis that the Liberty Dollar is counterfeit, has led us to adopt a policy to exclude such items from our bourse floor and educational exhibit area for our Schaumburg and future conventions,” Foley said in the Dec. 17 announcement.

Foley said Dec. 19 in a response to questions posed by Coin World that the decision to ban Liberty Dollars from CSNS conventions was based on his recommendation in his capacity as convention chairman. The ban was implemented in consultation with CSNS President James Moores with the knowledge of the entire CSNS Board of Governors, according to Foley.

“The decision was arrived at within the past week and was predicated on the federal court criminal conviction of Mr. Von NotHaus and the finding in that action that the ‘Liberty Dollars’ are considered by the federal authorities to be counterfeit,” Foley said Dec. 19. “Our action was additionally based on considerations arising from the fact that eBay has reportedly delisted these items from pending sales.

“Our decision is not based on any direct communications between the United States Secret Service and either our organization or any individual acting on its behalf,” Foley said.

Michigan collector James Zylstra exhibited his collection of Liberty Dollar medallions, paper warehouse receipts and promotional materials during the CSNS convention in Rosemont, Ill., in April 2011, a month after von NotHaus’s conviction. It represented the 10th time since 2009 that Zylstra had exhibited his Liberty Dollar collection.

When Zylstra tried to display his exhibit for an 11th outing, this time in August 2011 during the American Numismatic Association World’s Fair of Money at the same Rosemont venue, the exhibit was banned by ANA officials.

Zylstra was denied the opportunity to exhibit amid fears by ANA officials the exhibit’s contents would be seized from the 2011 convention bourse by federal authorities.

Secret Service officials have not responded to questions about the possibility of confiscations of Liberty Dollar medallions and paper receipts from Coin World.

Liberty Dollar medallions and paper receipts have been popular with some collectors since their original creation and release. ¦