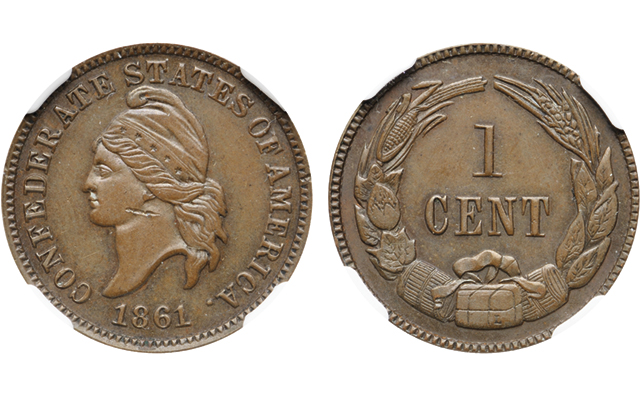 This 1861 Confederate States of America restrike cent designed by Robert Lovett Jr., sold for $16,380 during the Aug. 31 Bonhams auction in Los Angeles.

An 1861 Confederate States of America restrike cent sold for $16,380 during the Aug. 31 auction by Bonhams.

The copper piece was designed by Robert Lovett Jr. and features the head of Minerva facing left on the obverse. The reverse displays “a wealth of distinctive Southern agricultural products, including a bale of cotton at the bottom.”

The catalog cites the traditional story of the Confederate cent, noting that Lovett struck 12 pieces with his dies, but he “soon had second thoughts, and fearing arrest by Union authorities for aiding the Confederates, he cancelled the project and concealed the dies and the dozen coins.”

Time passed and in 1873 Lovett accidentally spent the one of the coins he’d kept as a pocket piece, according to the story behind the coin. Soon Capt. John W. Hazeltine and his associate J. Colvin Randall learned of the existence of the piece and made a plan to produce restrikes.

For more information, visit the firm’s website at www.bonhams.com.