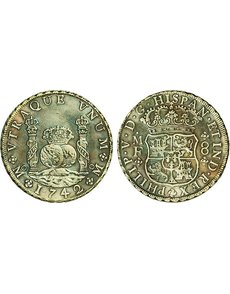 The most common crown of Colonial America, of course, was the Spanish silver 8-real coin. The Pillar dollar version of the 8-real coin, coined between 1732 and 1772, is perhaps the most iconic coin of the era.

Among the field of world coins, one specialty that sees unceasing popularity over the decades is crowns. These large silver coins, which Wayte Raymond once catalogued as “silver dollars of the world,” get their name from the British denomination of a crown, which equaled five shillings.

A wide range of crown-sized coins was present in early America, including the British coin that inspired the term. Though large numbers of British crowns were struck during the era of colonization, relatively few saw active circulation. At 30 grams, they were heavier than competing Spanish 8-real crowns and French ecus and were thus unlikely to be exported to the far-flung colonies. Some undoubtedly still turned up, and the British crown turns up on coin charts in Colonial America until the Federal period.

The Pillar dollar, the version of the 8-real coin coined between 1732 and 1772, is perhaps the most iconic coin of the era. The Spanish portrait 8-real coin picked up where the Pillar dollars left off, and most collectors of 18th century American coins seek out examples of both types to represent their dominant roles in American commerce.

French ecus, of similar weight and fineness to the Spanish 8-real coins, also saw circulation in early America. One French ecu was included in the Castine Deposit, lost in Maine about 1704. Many others are seen with early American countermarks from the lower Mississippi Valley, suggesting their prominence in the commerce of the formerly French regions of the new nation.

In Dutch New York, the famed Lion dollars held sway, so much so that the 1709 issue of New York paper money is denominated in them, a half century after the English took New York. Other Dutch types such as the patagon, issued in the Spanish-held portion of the country, the “Leg dollar,” and the silver Rider also circulated, imported from Europe and the Dutch islands of the West Indies.

Undoubtedly other world types were also mixed into the international mélange of early American types, including German talers, Brazilian and Portuguese types, and coins from trading partners in the Mediterranean. Ships from all over the world found U.S. shores.

A collection of early American circulating crowns could, likewise, include a fascinating diversity of types and eras.