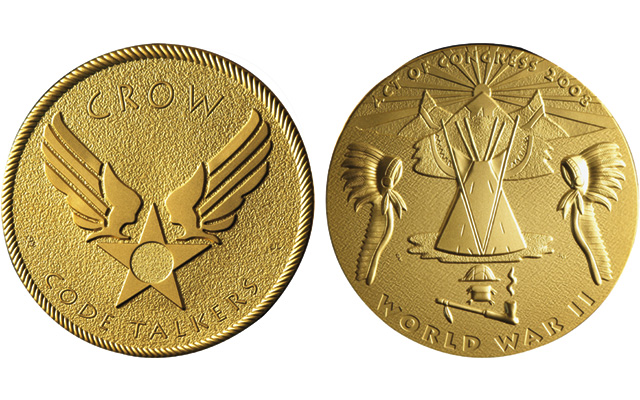 A variation of the Army Air Corps Wings and the Crow National seal appears on the obverse and reverse, respectively, of the Crow Nation Code Talkers congressional gold medal. Illustrated is the actual gold medal that was presented.

The Crow Nation Code Talkers congressional gold medal was presented Dec. 4 to the tribal leader during a ceremony at the United States Capitol.

U.S. Sen. Jon Tester, D-Mont., and Treasurer Rosa Gumataotao Rios presented the gold medal to Darrin Old Coyote, chairman of the Crow Nation. Old Coyote had grandparents on both sides of his family that served as code talkers in the U.S. military. Also present at the ceremony was U.S. Sen. John Walsh, D-Mont., and Cyril Not Afraid, a descendant of a Crow Nation Code Talker.

The Crow Nation medal is one of 33 congressional gold medals authorized under provisions of Code Talkers Recognition Act of 2008, Public Law 110-420, to Native American tribes whose members served as code talkers during World Wars I or II. Code talkers were Native Americans who used their tribal languages to transmit and receive military messages that the enemy could not decode.

Silver versions of the gold medal are being presented to surviving code talkers or their next of kin who have applied for the medal. The Mint has struck 1.5-inch and 3-inch bronze duplicates that are offered for sale.