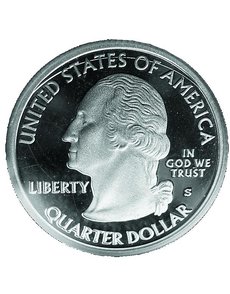 Obverse face of a 2009-S Northern Mariana Islands quarter dollar exhibits a raised crescent at its northern pole. It appears to represent a mishap during polishing of the field after the frosted texture was applied to the design. 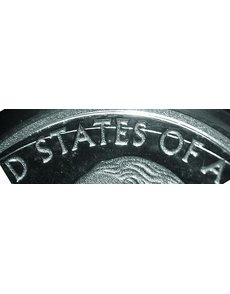 A close-up image illustrates the sharply defined step that defines the internal margin of the crescent. 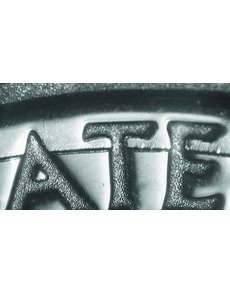 Close-up image depicts the letters sta (of states) showing narrowing of the parts of the letters that extend north of the step. 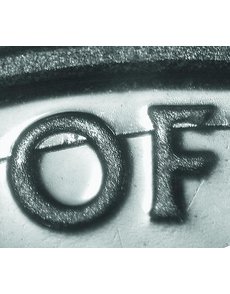 Close-up image depicts the word of showing thinning of the letters above the arcing step.

When Clair Alan Hardesty received his 2009-S Proof set, he immediately saw that something was wrong with his Northern Mariana Islands quarter dollar.

A thin, bright line could be seen arcing across the obverse face, cutting through the legend united states of america. The end-points of the line coincided with the inner margin of the design rim and extended from a point above the t of united to the e of america.

Recognizing it as a probable die error, Hardesty sent the coin to PCGS under their Mint error service. The response was disappointing and confusing. A customer service representative informed Hardesty that the grader had determined that “this is not an error coin. They are as struck.” Hardesty insisted that they look again, and the second response was similar, “The coin was re-evaluated for the error a second time. The information you provided was taken into account. Unfortunately the graders did not feel it was an error.”

Undeterred by the failure of PCGS to recognize a grossly obvious flaw, Hardesty sent the coin to me for analysis. Upon receiving the coin I immediately agreed that this is a significant die error. We next had to determine what kind of die error we were dealing with.

The bright arc is actually a sharply defined step. The crescentic area demarcated by the step is raised above the rest of the field. This indicates that the corresponding field portion of the die was recessed. The field has a mirror-like Proof finish above and below the step. However, faint radial ripples distort the surface of the abnormally polished crescent.

How was recess formed?

The question now turned to how this recess formed. A die dent seemed unlikely as this would have probably dulled the finish.

The available evidence indicates that the step and recessed crescent were caused by a mishap in polishing the die face to a mirror-like finish.

Die polishing is the exclusive province of Proof dies and dies that strike collector issues, like the coins in the Special Mint sets issued from 1965 to 1967. The intent is to create a highly reflective surface on the die and on the coins it strikes. If taken too far, this process can cause thinning of design elements and loss of details in the lowest parts of the design.

Die polishing of this sort should not be confused with intentional die abrasion designed to remove clash marks and other forms of die damage. Primarily applied to circulation-strike dies, such salvage attempts typically leave lots of die scratches and certainly don’t produce a mirror-like finish. The term “die polishing” is still sometimes used to refer to such salvage efforts, causing interminable confusion among collectors.

Hardesty proposed a slightly more complex scenario to explain this unusual error. He suggests that a strongly misaligned obverse (hammer) die collided with the top of the collar and that this collision left the step and the recess. He then suggests that Mint workers tried to salvage the die by polishing the damaged area.

A scenario involving collar clash and a subsequent repair job seems unlikely to me. It makes no sense to a repair such a heavily damaged die. There are no recorded cases of collar clash this offset and this severe among circulation strikes. A die dent generated by such a collar clash is unlikely to produce such a sharp step. Finally, the outer margin of the obverse die face retained its convexity (leaving a bowl-shaped perimeter on the coin). A collision as severe as Hardesty proposes should have flattened out that convexity.

Since die errors are repetitive, it is possible that more of these 2009-S Northern Mariana Islands quarter dollars remain to be found.