Home Hobbyist: How do you inspire hobby love? 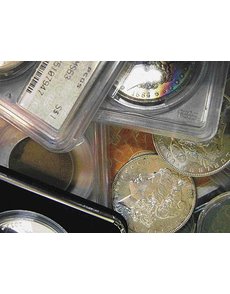 Recently my 9-year-old granddaughter moved to my town and asked to join the local coin club.

I have been sending her inexpensive coins for a few years now, and that inspired her to be a collector.

This week I’ll take her to our monthly meeting where she can win door prizes and learn about collecting.

Sometimes I worry that young collectors may lack what many of us enjoyed when we took up the hobby decades ago: the heft of a Peace dollar in our palm, the distinct tinkle of a silver half dollar, or the occasional Indian Head cent, Indian Head 5-cent coin and Winged Liberty Head dime in our change.

To be sure, coin collecting is not in any danger of waning as an investment. Rare coins keep selling at auction for record prices. But there is more to our hobby than rarities and records.

I’m 61 and began collecting coins at age 8. I’ve seen my collection migrate from coins in a cigar box to holdered coins in a home safe to the whole shebang in a bank box. I now “visit” my coins digitally via grading service set registries. In other words, like many of you reading this column, we all began by holding metal in our hands. Then we held plastic. Now we hold memories.

That’s why we should consider a home coin box with some of the numismatic items that captured our hearts in the first place.

Start with a cigar box, if you can find one. Or use a box of any kind — maybe a cedar jewelry box with that natural perfumed wood scent. (You don’t normally store coins in boxes because of rubs that decrease value of rare coins.) Remember, though, this is a box to show children and friends and interest them in the hobby.

Your box might contain a few inexpensive silver dollars. I like the 1887 Morgan dollar, one of the most inexpensive in low Mint State. You may want to include some low-priced coins of odd denominations like 2- and 3-cent pieces.

You might add a rainbow silver American Eagle, perhaps in a holder to preserve its colors. Throw in some steel cents, Civil War tokens or maybe even old pieces of paper money for mood.

Don’t forget a bank-wrapped role of cents, dimes, quarter dollars or half dollars.

Really, the choice is yours — whatever moves you.

You also might set a limit on value. My home collection is worth less than $500. But I get as much satisfaction from it as from my rarities at the local bank.

Do you have a similar coin box? If not, do you plan to make one?

What will you put inside it to inspire in others the love of our hobby?