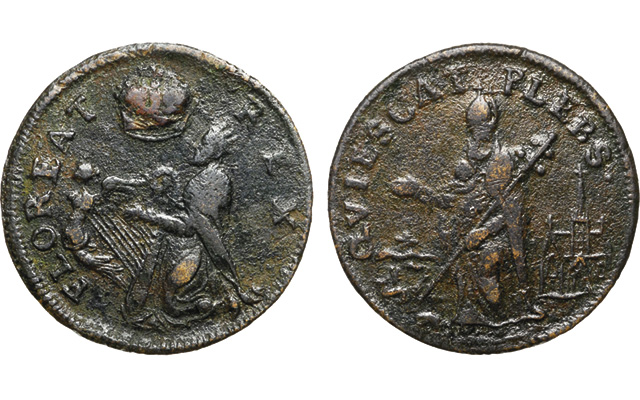 The circa 1670 St. Patrick farthing is a rich piece of Colonial American history. This one sold in Heritage’s May 16, 2014, auction of the Eric P. Newman Collection.

All home hobbyists have a coin (or several) that they covet but that they just can’t find or afford.

One of mine is the circa 1670 St. Patrick New Jersey farthing, which recently came up for auction on an online portal, Proxibid.

This coin was legal tender in colonial New Jersey, my home state. Examples come up for auction infrequently and, when one does, often the piece is low-grade, cleaned, corroded, holed or otherwise not grade-worthy.

It is especially important to purchase an example of this coin that has been authenticated by a reputable firm as counterfeit and replica versions of the coin are known in brass, copper and pewter.

As the lot was offered by Kaufman Realty of Sugarcreek, Ohio, I figured there probably wouldn’t be a bevy of bidders who understood the coin’s worth, meaning that I might have a reasonable shot at obtaining it for a decent price.

The St. Patrick New Jersey coins were issued in two denominations, the copper halfpenny and farthing. Both are desirable because of their design and history, displaying the patron saint of Ireland (who died on March 17, 461) on the reverse.

The reverse of the farthing, which I prefer, features a Christian church in the background with St. Patrick in the foreground in bishop’s garb, clutching a pastoral staff and driving serpents out of Ireland and into the sea. The legend above the scene, QUIESCAT PLEBS, translates to “May the People Be at Ease” (or Peace).

The reverse of the halfpenny features St. Patrick blessing commoners under the legend ECCE GREX, or “Behold the Flock.”

The obverse of halfpenny and farthing both feature a royal crown (typically highlighted with a splash of brass) above a king with harp, perhaps a depiction of King David (see 1 Samuel 16:23), under the legend FLOREAT REX, “May the King Flourish.”

The coins were said to be brought from Ireland to New Jersey by an Irish émigré named Mark Newby, who persuaded officials there to declare the halfpenny and farthing legal tender because of a shortage of coins in Colonial America.

I bid $450, all I could afford, in the Kaufman Auction. That coin however, realized a price of $1,840, remaining as elusive as ever to me.