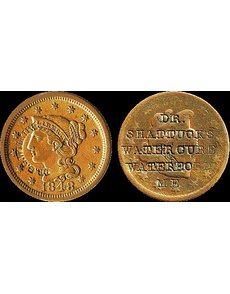 Among the things I like to collect are counterstamped large copper cents of the 1793 to 1857 era. I first discovered these as a teenager in 1955 when in looking through old issues of The Numismatist I found several articles on them. Eager to learn more I corresponded with Maurice M. Gould who, with his partner, Frank Washburn, operated the Copley Coin Co. on Boylston Street in Boston. Maurice, nicknamed Maury, had spent some years collecting these and was still doing research on them.

Particularly mysterious to him were cents that had names in raised letters within sunken rectangular frames. I saw a couple and thought they looked like silversmiths’ hallmarks as shown in a book I had on these. I mentioned this to Maury and before long he found that over a dozen early American silversmiths had tested their hallmark punches on cents.

Perhaps in an idle moment they punched cents as a novelty or as an advertisement for anyone who looked at them. Immediately I thought of counterstamps as “little billboards,” ones you could carry in your pocket.

From 1956 to 1960, I balanced my life between attending classes at Penn State and traveling on weekends to attend coin shows and auctions. I was one of just three “regulars” who sat in the back row of Stack’s auctions held at the time in Steinway Hall. The other two were Louis S. Werner, New York City dealer, and Asher Leatherman, a collector who hailed from Doylestown, Pa. I was an active bidder. I attended New Netherlands Coin Co. auctions as well and went to half dozen or so coin shows each year.

It became known among other dealers that I would buy “damaged” cents with counterstamps on them. As they had little value, typically a dollar or two or three with such defacing, it was very common for me to go to a coin show and have a colleague say, “Here you are, Dave, with my compliments. I saved these for you.”

Year by year, my collection grew. Then reality struck: I had too many to keep track of. I traded off a large number to Rich Rossa and Steve Tanenbaum in the 1990s, by which time counterstamps were indeed collectible and had value.

In the meantime I wrote a book on each of two counterstamps: Dr. Shattuck’s Water Cure and Dr. G.G. Wilkins. I still add to my core collection, which mainly consists of hallmarks, identifiable merchant stamps and political imprints.

Not long ago, I paid $400 for a hallmarked cent variety I did not have. Times and the marketplace do change!