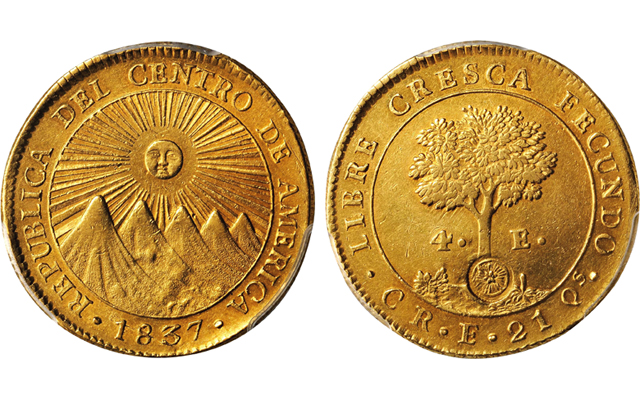 Counterfeiting led to one of Costa Rica’s rarest coins, from the early days of the nation’s founding.

Costa Rica separated from the Central American Republic in 1838 but continued to use the confederation’s coinage.

When fake gold 4- and 8-escudo coins of the Central American Republic surfaced in Leon, Nicaragua, a decree of Dec. 24, 1841, mandated that all coins then in circulation in Costa Rica, predominantly those of the Central American Republic but also foreign coins, would be countermarked. Silver coins had a portion removed to pay for the countermarking.

The only known genuine Central American Republic host coins for the gold issues are the 1837 4-escudo pieces and 1835 2-escudo coins, according to Stack’s Bowers Galleries.

Only five examples of genuine countermarked gold 4-escudo coins were known before this sixth example surfaced, the auction firm said, and this is the finest certified.

The six-pointed star countermark is applied on the reverse of the coin. The example offered by Stack’s Bowers Galleries is graded About Uncirculated 53 by PCGS and is estimated to realize $12,000 to $16,000.