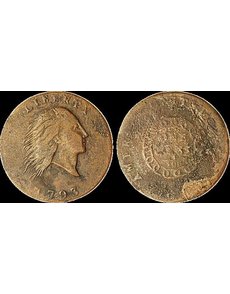 Fake and doctored coins pose long-term threats to the hobby. Shown is a legitimately produced replica of a 1793 Flowing Hair, Chain cent that was later artificially circulated after the word COPY was removed from the piece.

The problems of counterfeit coins and “coin doctoring” are two issues that have the potential to harm the coin market in the long term if not properly addressed.

The flow of counterfeit coins into the United States will be seriously impacted by Internet auction powerhouse eBay’s announcement that it will no longer allow the listing of replica coins effective Feb. 20. The threat of counterfeit U.S. coins, primarily from Chinese sellers, has been a burden on the market for several years. While people purchasing the counterfeits on eBay typically knew what they were getting, subsequent buyers often did not.

For replicas, eBay sellers typically pictured coins marked COPY in accordance with the Hobby Protection Act. However, buyers reported receiving coins without the required clear markings. To average collectors, many of these coins were good enough to pass as legitimate; especially with copper and copper-nickel coins that did not require precious metals to fully replicate the originals. For example, replica large cents in circulated condition were highly deceptive.

A long-term effect of the sale of these replicas marked with COPY is that these “coins” will eventually get passed down to future generations, and those who will receive them, likely unaware that they are replicas, could sell them as coins, whereby the pieces might trickle into the marketplace, casually included in collections of genuine coins.

Now that eBay has placed restrictions on the sale of replicas, a major supply point into the United States has been cut off. Especially when one considers that the sale of low-level forgeries potentially funded more advanced studies for counterfeiters for high-end coins, the new eBay policy should prove beneficial to the market in the long-term.

The ongoing discussion of “coin doctoring” continues to bring this problem to the attention of the hobby, and the multi-year struggles of the Professional Numismatists Guild to adopt a definition shows the problematic nature of the topic as the line between conservation and deceptive surface manipulation is often a fine one.

Like with the counterfeiting problem, as technology improves and the techniques of coin doctors improve, the potential for coin buyers to be harmed expands.

The long-term threat to the hobby is that once a coin buyer is burned, he or she may never return to buy another rare coin. ¦