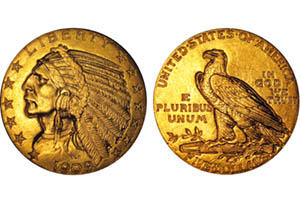 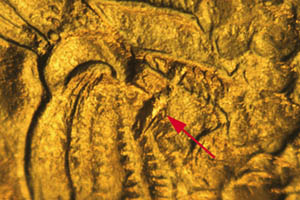 A noticeable diagonal depression is found in the headdress, to the lower right of the crescent, almost in the dead center of the obverse. 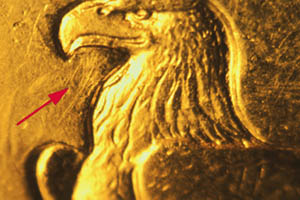 A patch of tool marks can be seen in the reverse field, below the eagle’s beak.

The Indian Head gold $2.50 quarter eagles and half eagles have been favorites of counterfeiters for as long as I have been working as an authenticator.

Something about the incuse design causes problems for many collectors when they attempt to identify fakes — even veteran numismatists and dealers have trouble with these pieces at times.

Due to this, my advice to collectors has always been to look for depressions and tool marks on the surfaces of a questionable example. The vast majority of counterfeit Indian Head quarter eagles and half eagles were produced using the transfer die process, where all the details of a genuine coin are transferred to a set of fake dies.

Tool marks are raised lines on the surfaces of a counterfeit. These occur when the counterfeiter takes a close look at his fake dies, sees a defect, and decides to “correct” the fake die using a sharp tool.

The process of removing a tiny amount of metal from the surface of a fake die leaves microscopic scratches on the die face, and these scratches result in raised lines on the resulting fake coin.

The 1909-D Indian Head half eagle shown here exhibits both depressions and tool marks. A noticeable diagonal depression is found in the headdress, to the lower right of the crescent, almost in the dead center of the obverse. If your up-close vision is good, you can spot this depression without magnification.

A patch of tool marks can be seen in the reverse field, below the eagle’s beak. These take a little work to spot, but with good lighting and a quality magnifier, most collectors will be able to see them. Notice how the raised lines tend to vary in both size and direction, which is the easiest way to differentiate between tool marks and die polish lines, since die polish lines tend to be uniform in size and direction.