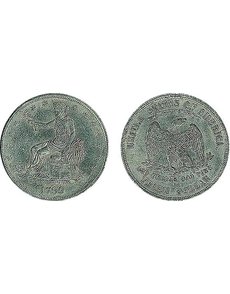 A jewelry shop in Franklin, Ind., was duped Aug. 3 into buying 25 counterfeit U.S. silver dollars, which included this 1896-CC piece bearing the Mint mark of the Carson City Mint in Nevada, which only struck coins from 1870 through 1893.

Police in Franklin, Ind., are being assisted by the U.S. Secret Service in Indianapolis in their investigation of a man wanted for duping a jewelry store owner into spending $2,400 for 25 U.S. silver dollars later found to be counterfeits.

The man wanted in Franklin, Ind., identified himself as Williams Jamies Thompson Reinaud using a Honduran passport for identification. He is also wanted by police in three other Indiana cities, as well as by authorities in Ohio and Virginia for pulling the same ruse, but with larger numbers of counterfeit Flowing Hair, Draped Bust, Trade, Morgan and Peace dollars.

The counterfeit coins are believed to be struck in China from base metals, according to Franklin Police Detective Scott Carter.

It is not known whether the man who identified himself as Reinaud, or used variations on the same name, is working independent of, or is anyway connected with Brian Jenkins, 52, of Irvington, N.J.

Jenkins was arrested July 21 in North Brunswick Township, N.J., by local police and U.S. marshals on multiple in-state and out-of-state warrants charging him with theft and using false identification in the sale of counterfeit U.S. silver dollars.

Authorities are investigating whether any connection exists because both men allegedly targeted different merchants in the same Virginia city.

Police in Fredericksburg, Va., have issued warrants charging Jenkins with an $18,000 fraud Feb. 28 at DND Jewelers involving scrap gold that later turned out to be plated, according to Capt. Brent Taylor, commander of the Fredericksburg Police Department Detective Division. Fredericksburg police are looking for Reinaud in a separate case involving the sale of counterfeit silver dollars at a pawn shop on May 7 in that same city. The transaction at the pawn shop involved $925 being paid at Cash Palace Pawn for 100 bogus silver dollars, according to police reports.

Jim Mottola, assistant special agent in charge of the U.S. Secret Service’s Newark, N.J., office, which is investigating Jenkins, said the office will be trying to coordinate its investigation with its counterparts in Indianapolis.

In the Franklin, Ind., case, the man identified as Reinaud allegedly sold counterfeit Morgan silver dollars at The Diamond Office on Aug. 3. Among the counterfeits was an 1896-CC Morgan dollar bearing the CC Mint mark of the U.S. Mint in Carson City, Nev. That facility only produced U.S. coins from 1870 to 1893.

Detective Carter said separate investigations involving Reinaud also are being conducted by police in Speedway, Richmond and Indianapolis in Indiana; in Fredericksburg, Va.; and in Columbus, Ohio. The incidents involve more than 250 counterfeit silver dollars that were exchanged for more than $5,000 total.

Incident not reported to police

In another case, a man fitting Reinaud’s physical description allegedly sold 200 counterfeit silver dollars Aug. 9 for $400 to a convenience store owner in Newport News, Va., who did not report the incident to authorities, according to a Coin World reader who wishes to remain anonymous. The counterfeit coins were stapled into 2-inch by 2-inch cardboard holders housed in sleeve pockets of pages in a notebook, according to the reader.

The counterfeits in the Newport News incident include: 1795 Flowing Hair dollar; 1797 Draped Bust, Small Eagle dollar; 1803 Draped Bust dollar, 1804 Draped Bust dollar (of which only 15 genuine examples are known and all worth more than $1 million each); 1847 Seated Liberty dollar; 1799-CC Trade dollar (Trade dollars were only struck from 1873 to 1885; the Carson City Mint was only open for production from 1870 through 1893); 1986 Statue of Liberty, Ellis Island dollar, with the date changed to 1906 with a 0 punched over the 8; and a goloid metric pattern dollar bearing obverse and reverse designs differing somewhat from the genuine patterns. Of the 200 counterfeits purchased, all but 10 stuck to a magnet, according to the reader.

Some 30 police agencies in more than a half dozen states in the eastern United States are investigating theft cases allegedly involving Jenkins in the sale of counterfeit silver dollars.

The U.S. Secret Service in Newark, N.J., is assisting North Brunswick Township, N.J., police in its investigation of Jenkins, as well as providing multi-jurisdictional assistance with other agencies. ¦