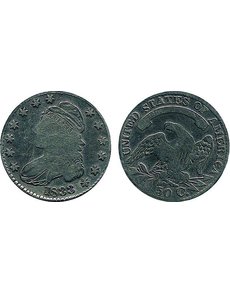 Tebben paid $70 in January for a counterfeit Good/Very Good 1833 Capped Bust half dollar, about $10 more than the authentic coin’s Coin Values price.

No book I’ve ever bought in 50-plus years of collecting compares to the sheer joy of reading the second edition of Keith R. Davignon’s Contemporary Counterfeit Bust Half Dollars, edited by Richard W. Irons.

In the early 1800s, private clandestine mints in the United States, Mexico and Canada produced countless cast and struck counterfeit half dollars. Quality ranged from laughably bad to so good they’ve fooled major grading services and major auction houses. Most of these fakes are easily mistaken at first glance for a real coin and most are well worn, indicating widespread circulation.

In 1845, New Orleans Mint smelter J.L. Riddell, scientist and medical doctor, issued a warning about the pieces, complete with illustrations of 87 fakes.

Davignon catalogs a run of pieces from a fake 1807 Draped Bust half dollar to an 1842 piece, dated three years after the Capped Bust half series ended. Davignon says some of the 1832-dated counterfeits have a strong connection to the Philadelphia Mint. Counterfeit working dies were prepared with “hubs and numeral punches [that] all match those used in the U.S. Mint.” While the answer will never be known, Davignon asks, “Was someone at the Mint actually a midnight counterfeiter?”

Davignon’s 326-page hardbound book devotes just over 100 pages to commentary about the coins, their makers and their place in history and 200-plus pages to an illustrated catalog of each of the 339 counterfeit varieties that were known up to publication last year. The book greatly expands on the first edition of 1996. It contains an entertaining introduction by Bust half dollar specialist and dealer Sheridan Downey and an illuminating chapter on the fakes’ historical context by fellow Coin World columnist Brad Karoleff.

Davignon calculates 2,500 to 10,000 “bogus Busties” survive. The book estimates the rarity of each variety (“common” coins have an estimated 10 to 19 known examples), but has no price guide. The fakes have traded for decades in an underground market, with prices based mostly on the buyer’s desire and the novelty of the issue. The pieces, which rarely grade above Very Good, often sell for more than their authentic counterparts.

I paid $70 in January for a fake Good/Very Good 1833 Capped Bust half dollar, Davignon 6-F, about $10 more than the authentic coin’s Coin Values price. Like all good coins it has an accompanying story, and I delighted in telling it at the local coin club’s show-and-tell session. The Davignon book is available for $49.95 plus shipping from the Contemporary Counterfeit Capped Bust Half Collector Club, www.cccbhcc.com, or Richard W. Irons, Box 4482, Lancaster, PA 17604.