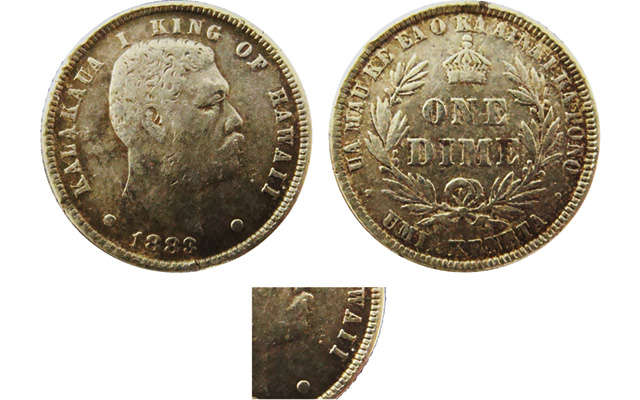 This fake 1883 Hawaiian dime has a raised lump on the king’s mustache and several raised lumps in the field between the king’s chin and the II of HAWAII.

In 1883, the Kingdom of Hawaii authorized the production of a set of silver coins, intended to ease the coin shortage on the islands.

These coins were designed by Charles Barber of the U.S. Mint, and struck at the San Francisco Mint. Each coin featured a portrait of King Kalahaua I on the obverse, with the Hawaiian motto and the denomination on the reverse.

While the dime (or umi keneta) had the lowest original mintage of the four coins struck for circulation, it had the highest usage rate with the Hawaiian people, and had the fewest number melted when these coins were redeemed 20 years later. Many of the ONE DIME pieces were made into jewelry over the years, also assisting with their survival rate. The Hawaii 1883 dime is fairly reasonably priced, with undamaged coins in the Fine to Extremely Fine range selling for $50 to $250.

At the current price of silver, the fabrication cost for a 90 percent silver dime blank is about $1.25, so there is an obvious counterfeiting incentive. Fake pieces like the one shown here are offered online, at flea markets, and other venues, usually at bargain prices to entice collectors.

Fortunately, diagnostics for this fake are fairly easy to spot. A raised lump appears on the king’s mustache, and several raised lumps are in the field between the king’s chin and the II of HAWAII. The details are slightly rough and ragged, but without a genuine coin to compare to, this diagnostic is harder for the average collector to detect. The weight, diameter and thickness were all identical to a genuine example.

If the coin is not sealed in a holder that obscures the edge, be sure to closely inspect the edge reeding on a Hawaii 1883 dime you are considering buying. A genuine coin has fine, even edge reeding that is very similar to a Barber dime, while this fake has coarse, uneven reeding that is much too sharp for a circulation coin. I did a quick count of the edge reeding — a genuine example has 124 reeds, while the fake had 83 reeds. If you line up a genuine coin next to this fake, the differences are obvious.

Collectors need to focus on the edge reeding diagnostic, and not just for this particular fake.