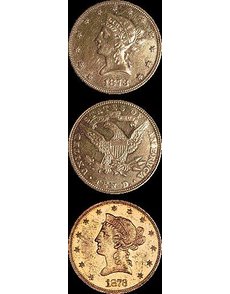 The date digits are much closer together on a genuine 1873 Coronet $10 eagle, bottom, than on the counterfeit, top, and the 3 in the date on the genuine coin is the Closed 3 version.

This has not prevented counterfeiters from giving it a shot. The fake shown here is a good example of the type of counterfeit being imported into the United States from the counterfeit factories in China and other parts of the Far East. While the quality of this fake is much better than many of the counterfeits we see at ANACS, it is still fairly easy to detect.

Accuracy in other parts of the fake is somewhat disconcerting. Details in Liberty’s hair and the eagle’s feathers are correct compared to a genuine coin, and weight and metal content are within tolerance. If the counterfeiters continue to improve their “product,” they will eventually have exceptionally deceptive fakes.

But why would they pick a rare date to counterfeit? This type of coin is rarely encountered in the numismatic marketplace unless it is graded and encapsulated by one of the major grading services.

One possible answer to this question lies with the psychology of the “bargain hunter.” The cost to produce this fake is currently about $800 in gold, and probably another $200 per coin in fabrication expenses (the cost of making the dies, wear and tear on their coinage press, utilities, and so on). Selling this fake to an unwary collector for $2,000 to $2,500 gives the counterfeiter a healthy profit, and many bargain hunters just can’t help themselves when they see a $10,000 coin selling at a huge discount.

However, the most likely answer is that the person making the fake die simply did not know that an 1873 Coronet eagle is a rare date. The counterfeiter may have produced a counterfeit die with a common date, such as 1874, 1878 or 1879, struck some fakes, then altered the date on the die to 1873 just so he or she could offer a wider range of dates.