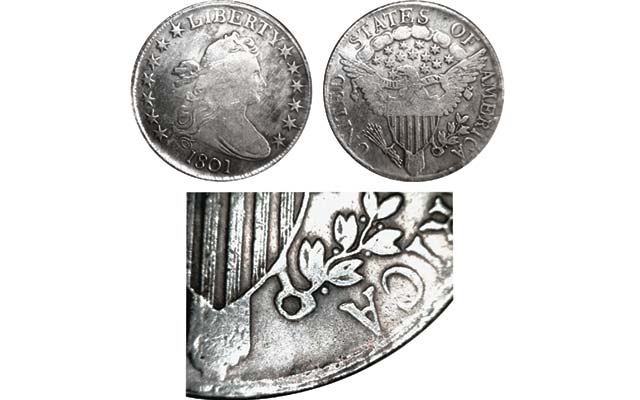 Not only does this fake 1801 Draped Bust half dollar weigh considerably more than a genuine example, the reverse Stem Not Through Claw diagnostic, shown in close-up image, is only found on coins dated 1806.

Another example of an early U.S. silver coin being counterfeited by our “friends” from Asia is not one of the really deceptive counterfeits we have seen at ANACS — it has a number of reasonably obvious diagnostics that should make it easy to detect.

First off is the weight of the fake. A genuine 1801 Draped Bust half dollar began life at approximately 13.48 grams. Allowing for the amount of circulation this counterfeit appears to have, it should weigh somewhere between 13.2 and 13.3 grams if genuine. The fake weighs 13.81 grams, which is much too heavy to be real.

Workers at the U.S. Mint in the early 1800s were extremely careful to get the weight right on the silver and gold coins being struck, so an example that weighs this much is virtually unknown.

Second, a quick check of the standard reference, Early Half Dollar Die Varieties 1794-1836 by Al C. Overton, verifies that no genuine 1801 half dollar matches this piece. In particular, notice that the stem of the olive branch stops at the top of the eagle’s claw, instead of continuing below the claw.

The “Stem Not Through Claw” engraving error occurs only in 1806 for the Heraldic Eagle Reverse design. The counterfeiters used an 1806 half dollar, Overton 109, as the model for their fake dies, and altered the date on the fake die from 1806 to 1801 afterwards.

Finally, a quick inspection of the lettered edge of the fake exposes a rather comical mistake. A genuine 1801 Draped Bust half dollar has FIFTY CENTS OR HALF A DOLLAR on the edge of the coin. Someone working quality control at the counterfeiting factory must have taken a nap that day — the fake has HUNDRED CENTS ONE UNIT on its edge. A genuine 1801 Draped Bust dollar has HUNDRED CENTS ONE DOLLAR OR UNIT on the edge, so it appears that they cut some corners to save time and money.

A close inspection of the finer details and devices on the fake shows the typical roughness we see on this type of counterfeit, but this can be obscured if the coin’s surfaces are corroded or abrasively cleaned, as many are. Collectors will be better off focusing on die diagnostics when confronted by a counterfeit like this one.