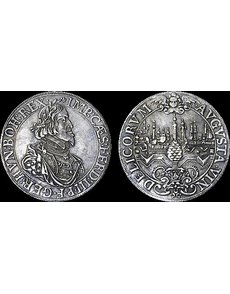 Counterfeit 1641 Germany-Augsburg taler was struck from counterfeit dies, not cast. It weighs 24.46 grams, nearly 5 grams below its intended weight. The finer details on the fake are fuzzy and rounded, with fine cracks in the fake’s surfaces from lack of metal flow.

A counterfeit coin recently seen at ANACS was a bit of a surprise to us. The coin being copied was a Germany-Augsburg 1641 taler, bearing the Ferdinand III and City View designs.

As a general rule, the only fakes of European talers from the 1500s and 1600s are cast copies, and most of these are fairly obvious counterfeits, usually with pitted surfaces and a seam on the edge.

This fake is a die-struck counterfeit, most likely from the counterfeiting mills in China.

The finer details on the coin are a little fuzzy and rounded, and the edge does not exhibit the shearing effect that is normally seen.

The designs and the placement of the lettering on the fake coin are reasonably accurate, indicating that the counterfeit dies were produced either from a genuine coin or from a high-quality image of a genuine coin.

Another problem we noticed was a lack of metal flow and “cracking” on the fake’s surfaces.

Due to the primitive way that blanks were produced and the resulting coins were struck, genuine coins will usually exhibit a minor degree of tiny cracks and splits in the metal, often near the rims.

Everything involving this fake, including the production of the blank and the dies, as well as the striking operation, would have been performed using modern manufacturing technology. As a result, the surfaces of the fake are much more smooth and uniform than the surfaces of a genuine coin.

The weight of the fake is the easiest diagnostic. Genuine German talers from this time period should weigh approximately 29 grams, give or take half a gram. This fake coin weighs 24.46 grams, which is a significant difference. While it is not always possible to obtain an accurate weight on a coin you are inspecting at a coin show or convention, this type of weight difference can often be detected by an experienced collector just by its “heft.”

This is not the type of counterfeit that would fool an experienced collector or dealer that specializes in European talers, so if you are interested in adding a few pieces to your collection, dealing with recognized experts is your best defense against counterfeits.

Online auctions seem to be the way that many of similar fakes are being sold, so be very cautious with these.