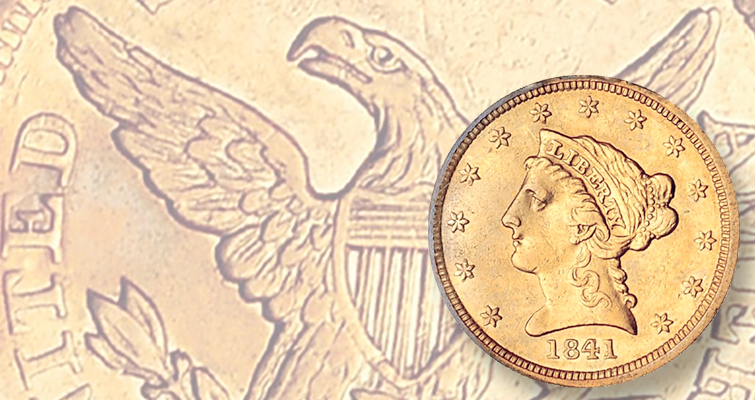 The 1841 Coronet quarter eagle, nicknamed “The Little Princess,” is a mysterious issue for which no mintage figure was recorded. 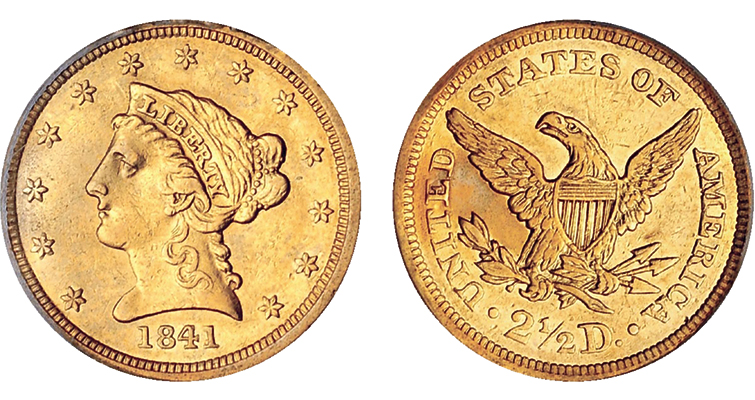 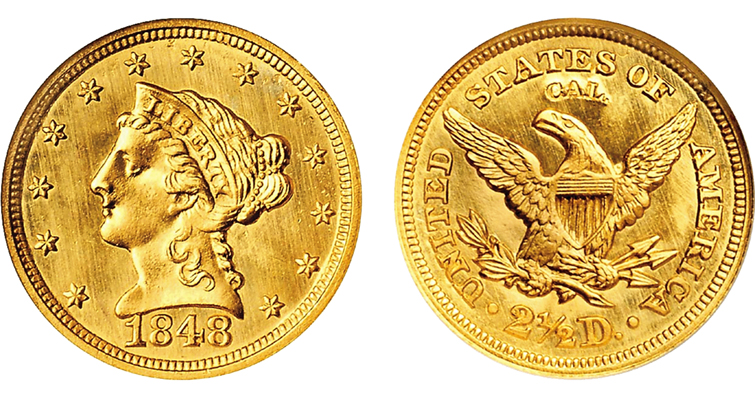 Above is the 1848 Coronet, CAL. quarter eagle counterstamped on the reverse—struck from metal brought from California to the East.

The Joys of Collecting column from Aug. 17, 2015, weekly issue of Coin World:

Coronet gold $2.50 quarter eagles have only one design type — a longevity unequaled in any other American series. The coins feature Charlotte, Dahlonega and New Orleans Branch Mint marks up to the Civil War and San Francisco Mint marks from 1854 to 1879. The Philadelphia Mint issued them from 1840 to 1907.

U.S. Mint engraver Christian Gobrecht designed the coin. The obverse features a Liberty Head portrait with coronet, 13 stars surrounding, and the date below. On the reverse is a perched eagle.

Collecting Coronet quarter eagles by date and Mint mark can seem daunting at the outset. In reality, all but a handful are readily collectible. In such grades as Very Fine and Extremely Fine the vast majority cost less than $1,000, and many less than $500.

The series has several rarities.

The 1841 Coronet quarter eagle, nicknamed “The Little Princess,” is a mysterious issue for which no mintage figure was recorded. Could they have been made in connection with the inauguration of William Henry Harrison in March of that year? A dozen or so exist.

The 1848 Coronet, CAL. quarter eagle, with inscription counterstamped on the reverse, is another key coin and was minted to the extent of only 1,389 pieces, using gold brought from California to Washington by a special messenger and examined by President James Polk, then sent to the Philadelphia Mint.

After December 1861, gold coins were hoarded in the East and Midwest and did not circulate. They sold at a sharp premium in terms of legal tender notes when purchased from banks and brokers.

On the West Coast, the opposite was true: gold coins were plentiful in circulation, but legal tender notes sold at a sharp discount. As San Francisco Mint quarter eagles circulated more extensively than did Philadelphia coins during and after the Civil War, most seen today are in such grades as Very Fine and Extremely Fine, while for Philadelphia Mint coins, About Uncirculated and Mint State coins are the rule.

Gold reached parity with paper money in the East and Midwest on Dec. 17, 1878. Anticipating a huge demand for gold coins, the Mint ramped up production. Demand did not happen. Citizens were satisfied with paper money, knowing it could be exchanged for gold. The mintage of quarter eagles dropped off precipitously until the turn of the 20th century.