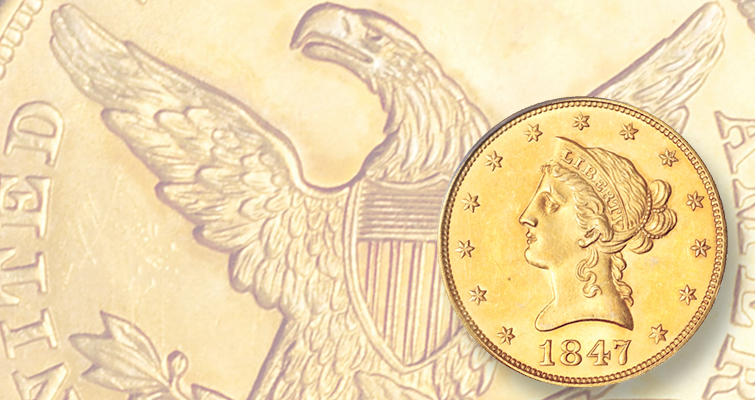 The 1847 Coronet gold eagle is very common in Very Fine and Extremely Fine, and a few low-level Mint State coins exist. However, a Gem MS-65 coin, if such could be found, would be an ultra-rarity! 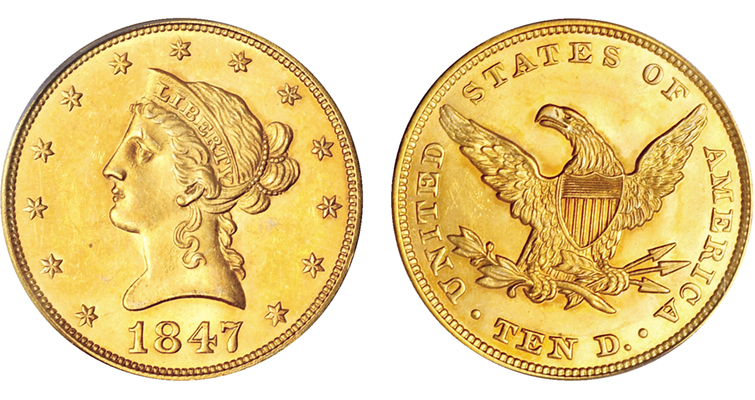 The Coronet gold $10 eagles, minted from 1838 to 1907, are from what is probably the most “forgotten” of all major series in American numismatics.

The Coronet gold $10 eagles, minted from 1838 to 1907, are from what is probably the most “forgotten” of all major series in American numismatics. Why?

Dating back to the 1930s, there is and was a great interest in collecting these coins by date and Mint mark.

Remarkably, many circulation strikes from 1838 through the late 1870s are either completely unknown in Mint State or are extreme rarities. This is particularly true of coins from the New Orleans, San Francisco, and Carson City Branch Mints. The explanation is simple: in that period, not a single numismatist is known to have had an interest in Branch Mint coins! Not even the curators of the Mint Cabinet bothered to save them. Collecting by date was standard, and most buyers bought Proofs when they were available or else chose circulated coins, not caring if they had Mint marks.

In the 1930s, strong interest developed in Mint-marked gold, with Floyd Starr, Louis E. Eliasberg, Emery May Holden Norweb, and others avidly seeking such coins.

Eagles of 1838 to late the 1870s, when found, were apt to be in grades from Very Fine to About Uncirculated. Many of these were rescued by Treasury Department employees and bank tellers who received them as deposits when Franklin D. Roosevelt commanded that public citizens (numismatists excepted) surrender their gold coins. Those receiving them kept scarce pieces and swapped common coins for them — an ideal situation as Uncle Sam sent the coins to the melting pot. A common 1901 eagle had just as much gold as a rare 1870-CC coin.

In the late 1940s, into the 1950s and onward, the supply of gold coins increased dramatically.

American dealers, with Paul Wittlin and James F. Kelly leading the way, contacted banks in Switzerland, France, Venezuela, and other countries and launched the repatriation of millions of American gold coins that had been exported in earlier times. Many Mint State eagles were found, but nearly all of these dated from the 1880s into the 20th century. So far as I know, no early Mint State gold eagles were located.