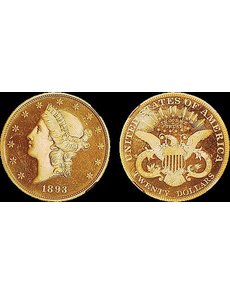 1893 Coronet $20 double eagle graded NGC Proof 63+ Ultra Cameo is one of four U.S. gold coins that were found in a building’s cornerstone before the structure was razed. The building’s location has not been identified.

Four United States gold coins removed from the cornerstone of a private building in Philadelphia before demolition are being offered in Legend-Morphy Rare Coin Auctions Dec. 19 in Las Vegas, Nev.

The four coins are among 375 lots to be offered in The Regency V Auction at the The Venetian/The Palazzo, 3355 S. Las Vegas Blvd., held in conjunction with the Professional Coin Grading Service Members Only Show

The cornerstone coins are:

The consignor of the four gold coins is Richard Weaver, president of Delaware Valley Rare Coins in Broomall, Pa. He said Nov. 19 that he purchased the coins in August from the children of the owner of the demolition company that razed the Philadelphia structure.

Weaver said the owner of the demolition company passed away two years ago.

Weaver said he was not provided any details about when the structure in which the coins were secured was razed, nor identification of the actual building. Weaver said the demolition company owner’s children had been informed by their father of the existence of the coins, but their father provided them with no documentation detailing the gold pieces.

The coins were first submitted to NGC for certification, but were first curated by NGC’s affiliated company, Numismatic Conservation Services, to remove a heavy film that enveloped each of the four coins, before NGC grading and encapsulation, Weaver said.

The coins are being referred to in the auction as “The Northeast Demolition Group.”