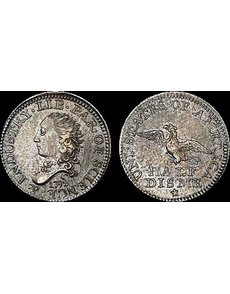 This 1792 half disme, graded Extremely Fine, in the ANA’s museum collection since 1978 and now missing, was last featured in an exhibit in 2005. The images date from May 18, 2006, when the coin was photographed by ANA curator Douglas Mudd.

The American Numismatic Association’s Edward C. Rochette Money Museum in Colorado Springs, Colo., once again has a 1792 silver half disme in its numismatic collection.

Contursi said Jan. 26 that when he donated his coin he was unaware that the example of the famed rarity in the ANA’s collection was missing. He said he learned the ANA’s 1792 half disme was among a group of missing coins when ANA officials disclosed the fact on Jan. 19.

Contursi said he purchased from a client in September 2008 the coin he donated to the ANA and paid $220,000 for it. At the time of purchase it resided in a Numismatic Guaranty Corp. holder bearing a grade of About Uncirculated 58. He noted it was in the same holder when he gave it to the ANA.

ANA Director of Communications RyAnne Scott said Jan. 26 that the newly donated 1792 half disme has been removed from its holder and will be sent to NGC for reslabbing in a holder with a special ANA label.

ANA officials have announced that it will be on display at the organization’s National Money Show May 10 to 12 in Denver.

Contursi said he donated his coin to the ANA unrestricted, “with no strings attached,” explaining that it was his way of “giving back” to an association that he has “always believed in.”

During his 37-year career as a coin dealer Contursi has specialized in helping both collectors and other dealers acquire high quality, historically significant coins and has owned as a part of his personal collection some of the United States’ greatest rarities. They include the unique EB on Breast 1787 Brasher doubloon and a 1794 Flowing Hair dollar, believed by researchers to be the first silver dollar coin struck by the United States Mint. During his ownership he loaned both of the coins to ANA for exhibit in its museum as well as for special exhibits at national coin shows.

Contursi said he has bought and sold a number of examples of the 1792 half disme during his career, ranging from the finest known, graded Mint State 68, to circulated specimens. In fact, he currently has one that grades MS-65 in his collection.

Approximately 1,500 half dismes were struck in July 1792. They were the first coins struck to conform to the specifications required in the Act of April 2,1792, the original statute that established the United States Mint and regulated U.S. coinage. Modern researchers estimate that approximately 275 examples (in all conditions) of 1792 silver half dismes survive today.

The 1792 half dime missing from the ANA museum was donated by an anonymous benefactor in 1978 and at that time was graded Extremely Fine. It was featured in a special exhibit during the ANA’s centennial convention in Chicago in 1991 and again in 2005 in a special exhibit at the ANA’s museum in Colorado Springs, Colo. ¦