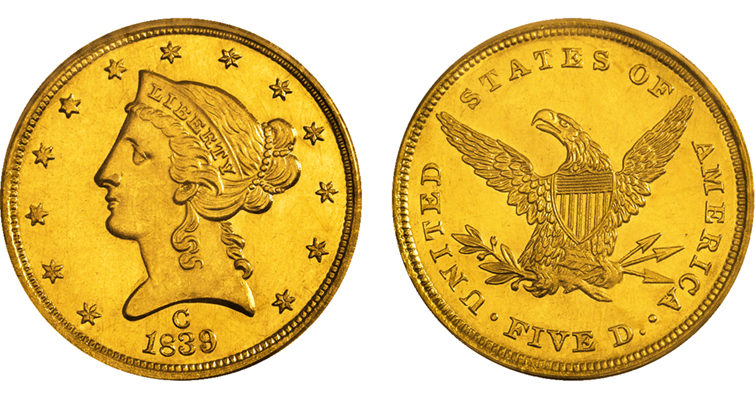 An 1839-C Coronet gold $5 half eagle from the Harry W. Bass Jr. Foundation shows a C Mint mark on the obverse. 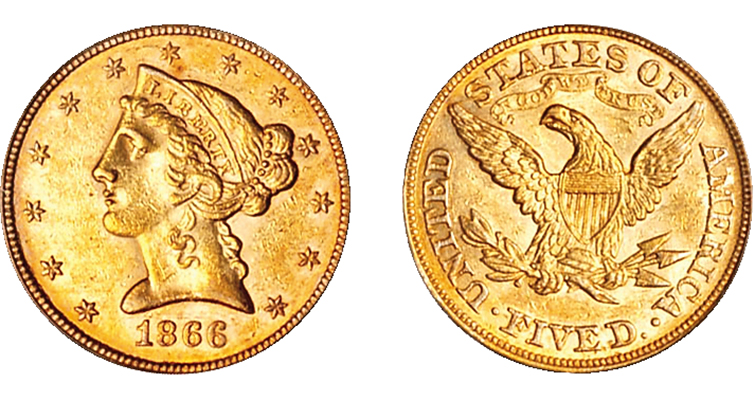 This 1866 Coronet, With Motto half eagle bears IN GOD WE TRUST. It was struck at the Philadelphia Mint.

Coronet $5 gold half eagles, sometimes referred to as Liberty Head coins, were minted continuously from 1839 to 1908. The design was by U.S. Mint engraver Christian Gobrecht, best remembered today for his Seated Liberty silver coin motif.

The gold $5 coin shows a head of Liberty on the obverse, wearing a coronet or tiara, with 13 stars surrounding and the date below.

The reverse depicts a perched eagle, a variation of a motif first used by John Reich on the reverse of the gold $5 coins of 1807.

Coronet half eagles were struck at the Philadelphia Mint each year. At the Charlotte, Dahlonega and New Orleans Mints, they were coined intermittently until the Civil War in 1861. In the first year, 1839, the Charlotte and Dahlonega Mints struck this denomination. A Mint mark, C or D, was placed on the obverse above the date. Beginning in 1840, Mint marks were added to the reverse below the eagle.

In March 1854 the San Francisco Mint opened. In that year only 268 half eagles were minted, creating what is recognized today as one of America’s greatest rarities. During and after the Civil War coinage took place only at the Philadelphia and San Francisco Mints. It was a time of uncertainty, and in the East and Midwest citizens hoarded silver and gold coins, especially after legal tender notes were authorized in March 1862. The Treasury was low on funds, and such bills could be exchanged at par only for other paper money, not for precious-metal coins. Not until Dec. 17, 1878, were the legal tender notes and gold traded at par.

On the West Coast coins were plentiful and used in commerce at face value. Legal tender notes traded at a deep discount.

There was a modification in 1866 when the motto IN GOD WE TRUST was added to the reverse.

In 1894 when Augustus Heaton produced his Mint Marks treatise, he could not find a single person who collected $5, $10, and $20 coins by Mint mark.

The result today is that nearly all Mint-marked half eagles of the early years range from rare to extremely rare in Mint State.