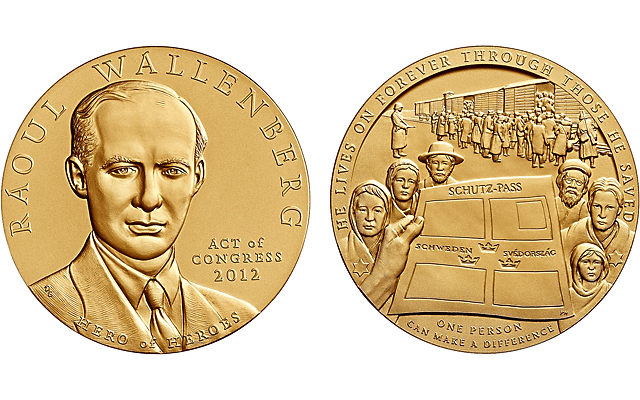 Bronze duplicates of the Raoul Wallenberg congressional gold medal went on sale at noon Eastern Time July 10. The gold medal was presented by the congressional leadership during July 9 ceremonies at the U.S. Capitol Rotunda.

Bronze duplicates of the Wallenberg medal were offered by the U.S. Mint beginning at noon Eastern Time July 10.

Wallenberg was honored for his humanitarian efforts saving the lives of thousands of Hungarian Jews during the Holocaust.

Wallenberg was born Aug. 4, 1912. After graduation from the University of Michigan in 1935, he returned to Sweden where he followed a career as a businessman and architect, and then became a diplomat and humanitarian. As a Swedish businessman operating in Hungary in the early 1940s, he gained insight into anti-Jewish policies in that Eastern European nation.

While working at the Holland Bank, Wallenberg began to meet young Jews who had been forced to flee from Nazi persecution in Germany. Working with the War Refugee Board, Wallenberg helped save more than 100,000 Hungarian Jews during the Holocaust, many of whom later immigrated to the United States. Today, hundreds of thousands of American Jews can directly or indirectly attribute their own lives to Wallenberg’s heroic actions.

Wallenberg is presumed to have died July 17, 1947, at age 34 at Moscow’s Lubyanka, a building that housed both KGB security headquarters and affiliated prison. Wallenberg was reported to have been detained Jan. 17, 1945, by Soviet authorities on suspicion of espionage during the Siege of Budapest by the Red Army, and later disappeared.

Designed and sculptured by U.S. Mint Medallic Sculptor Phebe Hemphill, the reverse depicts Wallenberg’s view as he extends a Schutz-pass and a background view of those he could not reach being boarded on a train bound for a concentration camp.  Inscriptions are HE LIVES ON FOREVER THROUGH THOSE HE SAVED around the upper border and ONE PERSON CAN MAKE A DIFFERENCE beneath the Schutz-pass.

The enabling legislation, Public Law 112-148, signed into law by President Obama on July 26, 2012, requires the U.S. Mint to strike the bronze duplicates of the 3-inch Wallenberg medal.

The medals may be purchased via the bureau’s online catalog and by telephone at 800-872-6468. Hearing- and speech-impaired customers with TTY equipment may call 888-321-6468 to order the medals.