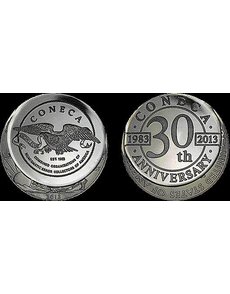 The medal design features CONECA’s logo on the obverse — an outstretched eagle with a ribbon in its beak that boasts CONECA’s motto, “Knowledge through Education.”

The reverse design shows a stylized 30th anniversary motif and states CONECA was formed in 1983.

In a departure from its previous 20th and 25th anniversary medals, the organization decided that no normal strike medals would be made this year.

How medals were struck

Error coin specialist Ken Potter, who arranged to have the medals struck, said each American Eagle silver bullion coin was “placed on the dies by hand, safety doors closed, and struck one at a time. The obverse die was cut by Brian Timmins of Landmark Die Engraving of De Pere, Wis. in 2008 while the reverse ‘30th’ side die was produced by BEX Engraving Co. Inc. in Fullerton, Calif. this year.”

Many of the overstrike medals are similar, but every one of them is different in one way or another due to them being hand-fed into the press, according to a CONECA news release.

Potter said the medals “are stunning with deep cameo devices on highly reflective mirror-like fields contrasted against the satiny finish of the host coins.”

CONECA’s medals program began as a way of raising funds for the club with the specific purpose of preventing an increase in its membership dues.

In 2003 CONECA’s annual dues were $20 and it was demonstrated that they needed to be raised to $30 if the club was going to continue to exist.

A compromise was hammered out with annual dues raised only to $25 with several board members committing themselves to projects to provide the necessary funds to keep the club running without raising dues again the next year, according to the news release.

To date, CONECA has never had to raise its dues, in large part because of the profits made from medals sold in 2003 and 2008, it said.

CONECA’s initial order was for 100 pieces. CONECA has typically sold somewhere between 50 and 100 of each of its past silver issues.

Each medal costs $65. Add $4 postage and insurance for the first medal, plus $1.50 each for any additional medals ordered. Buyers from outside the United States should check with program coordinator Al Raddi for postage rates by emailing him at alraddi@aol.com.

Checks or money orders should be made out to CONECA and sent to CONECA Medals Program, c/o Al Raddi, 591 Tower Ridge Court, Milford, MI 48381.

Medals may also be ordered from the club website, www.ConecaOnLine.org.

CONECA will also have a club table at the American Numismatic Association World’s Fair of Money Aug. 13 to 17 in Rosemont, Ill., where the dies will be on display and medals will be available for sale.

Members of both organizations had long and sometimes tumultuous discussions beginning in 1981 about merging into one club. The proposal was for the two clubs to merge under the umbrella of The Error Coin Museum, which was founded in 1981 by long time error dealer “Lonesome” John Devine.

The proposed affiliation with the museum was extensively discussed by both groups at meetings held during the 91st American Numismatic Association convention in Boston in 1982.

The new organization’s name was derived from combining the acronyms of the two parent groups. Initially the name “CONECA” stood for nothing, but after one unrelated name was briefly adopted and then dropped, club members decided on the full name of “Combined Organizations of Numismatic Error Collectors of America.”

In 1985 CONECA ended its merger with The Error Coin Museum.

The club publishes a bimonthly magazine, Errorscope, for its members. Visit the club website at www.conecaonline.org. ¦