Condition rarity worth a fortune 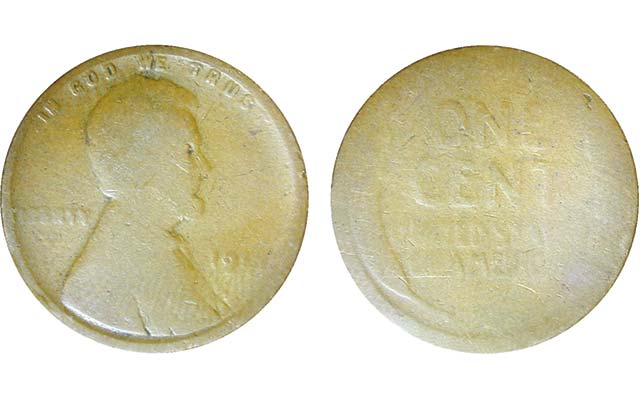 Despite its heavy circulation wear, diagnostics place the minting of this coin at the Philadelphia Mint sometime between 1910 and 1917.

Numismatists tend to prize coins that are pristine and that are in as close to perfect condition as they possibly can be. A coin graded as a perfect Mint State 70 can be a treasured rarity, while a coin of the same date and Mint mark combination graded MS-63, a lesser condition, could be considered common.

A circulated Lincoln cent dated 1965, for example, is worth face value, while 1965 Lincoln cents graded MS-67 red, a high grade of Uncirculated for the date, will routinely sell for hundreds of dollars. The reason for that is something known as condition rarity.

A coin that may be plentiful in average condition may be extremely rare in the highest grades of preservation, and often that rarity can dictate a coin’s value to a collector and hence, its price.

Now, this month’s fun find is not being shown for its ability to knock our socks off condition-wise, as it is certainly not a high grade example. This coin, in fact, would have to come up a few grades just to reach About Good 3.

This coin, however, is being featured as an example of one of the most worn Lincoln cents that I have ever found in a roll.

That may not mean much to many collectors, since the worth of this cent as a collectible might be less than the value of the dust on my desk, but I like the coin as an example of one that has had a full, rich and rewarding life.

Identifiable as a Lincoln, Wheat Ears cent, its date is visible, up to a point. I am able to make out the digits 191_. Any more than that would be an educated guess, but I will try to go further.

The portion of Lincoln’s bust just below the shoulder has no evidence of the VDB (Victor David Brenner) designer’s initials. Of course evidence of the VDB could have been worn off the coin, but the shape of that part of the bust is slightly narrower on pre-1918 issues and this coin seems to have a more narrow base to the bust.

Since the VDB initials were removed from the cent’s reverse design beginning in 1909 and restored to the coin, though at the base of Lincoln’s bust, in 1918, this cent was likely minted between 1910 and 1917.

Based upon a few strange effects of lighting as I examined the coin, the splotch of nothing that would be the last digit of the date just feels like a 4 to me. So, 1914?

As also an example of condition rarity, I think that this fun find should also be worth a fortune.