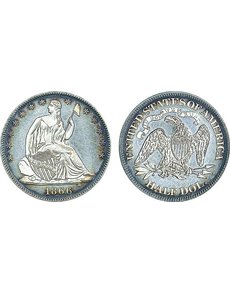 This attractive 1866 Seated Liberty half dollar was certified by Professional Coin Grading Service as grading Proof 60. To be sure, it was improperly cleaned, and extensively so, in its day, but now it is a highly desired collectible.

I am writing this on behalf of the owners of coins that have been cleaned, improperly retoned or are otherwise impaired so that if sent to Professional Coin Grading Service, Numismatic Guaranty Corp., or another leading grading service, they will be returned in a “body bag.”

There is the aspect of logic, and this is often conspicuously absent. First, I have yet to see a definition for “properly” cleaned. However, I know that an “improperly cleaned” reject is one that is brilliant but shows many hairlines in the field, from use of an abrasive during the cleaning process.

Then there is “artificial toning,” whatever that means. There seems to be “good” artificial toning — as in a large number of copper pattern coins from the King Farouk Collection (his majesty polished all of his coppers!) that have been expertly conserved and retoned and are now in holders of the leading services. Then there is “improper” toning, such as blotchy iridescent hues that might make a neon sign envious.

As Al Gore might say, the inconvenient truth is that any Proof coin — say a Barber or Seated Liberty silver coin — that has hairlines in the field has them by virtue of having been “improperly cleaned.”

The U.S. Mint did not issue coins with hairlines and the hairlines did not magically appear. Any coin certified as Proof 62, Proof 63 or any other grade below “perfection” is apt to have hairlines. And yet these are acceptable in most instances.

Artificial toning has been practiced for years. In his 1949 book, Early American Cents (later Penny Whimsy), William H. Sheldon gives detailed directions on how to do it.

The other day, while editing some catalog copy for Stack’s Bowers Galleries, this came to mind when a fairly nice consigned coin was tagged with a nasty note. The solution, or at least a matter for consideration: bring to the fore the matter of experts improving the appearance of coins. Many “hurt” coins can be brought back to desirability, as is constantly being done behind the scenes.

Perhaps the American Numismatic Association or Professional Numismatists Guild should have a forum, with the certification services participating, on how these coins can be expertly reviewed, and many of them revitalized using professional conservation methods.