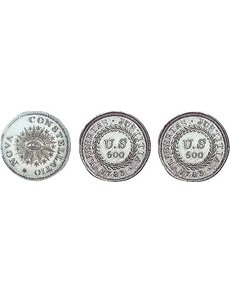 The only complete denominational set of 1783 Nova Constellatio patterns will be on exhibit at the Whitman Publishing LLC booth during the ANA World’s Fair of Money in Rosemont, Ill. Shown are the obverse and reverse of the 1,000-unit mark and the reverse of the 500-unit quint.

The only complete four-piece denominational set of 1783 Nova Constellatio coins, patterns for a proposed though unadopted U.S. coinage system predating the establishment of the U.S. Mint, will be on public display during the American Numismatic Association World’s Fair of Money in Rosemont, Ill., Aug. 16 to 20.

Whitman Publishing and Whitman Coin and Collectibles Expos will mount a special exhibit at the Chicago-area convention. The coins will be on display at booth No. 1057 Tuesday through Saturday, Aug. 16 to 20.

Visitors to the exhibit will receive a free six-page souvenir reprint of Coin World’s 1980 coverage of the famous pattern coins, including interviews with John J. Ford Jr., previous owner of the coins. Whitman will also raffle off copies of The Secret History of the First U.S. Mint and other books that study the early coinage of the United States.

The 1783 Nova Constellatio patterns were conceived as the first coinage for the new nation, immediately following the American Revolution while the Articles of Confederation governed the nation.

Gouverneur Morris, assistant superintendent of Finance for the United States, in 1782 proposed a convoluted coinage system. The basic unit for the system was a quarter grain of silver (0.01742 grain), the equivalent of 1/1,440 Spanish dollar, a silver coin universally accepted worldwide. Morris proposed a 10,000-unit gold coin, 1,000- and 100-unit silver coins, and possible fractional issues.

Whitman notes in a press release, “At the time, Americans were using for commerce a diverse mixture of state coinage, private tokens, counterfeit British coppers, and foreign coins, as well as various kinds of paper currency, none of which had a uniform value across all regions of the nation. The Founding Fathers hoped that the Nova Constellatio coins would provide a standardized system of United States money. ‘Nova Constellatio,’ meaning ‘New Constellation,’ is the inscription on their obverses, accompanied by an all-seeing eye and 13 stars representing the first colonies.”

Robert Morris, superintendent of Finance (and no relation to Gouverneur Morris), took steps to implement the coinage system. He hired Benjamin Dudley, a diesinker from Britain residing in Boston, to organize a mint, to engrave the dies and to strike the coins.

Dudley produced several 1783 test or pattern coins as a prelude to a mass production that never materialized. The test pieces were the copper 5-unit coin (equivalent to a half cent), the 100-unit bit, the 500-unit quint and the 1,000-unit mark.

The Nova Constellatio silver pieces had been known to the collecting community since the 19th century, when they entered the marketplace after being held in the estates of families with connections to the Founding Fathers. Of the five variations of the three silver coins, four are unique and one is represented by two pieces.

Two examples are known for the 100-unit bit with ornamented edge; the plain edge version is unique.

The two versions of the quint are each unique. One version features the inscription nova constellatio positioned around the seeing eye design, while the other version lacks the inscription and features a different rendition of the same design motif.

The existence of the copper 5-unit piece was revealed in the Jan. 9, 1980, issue of Coin World. Owner John J. Ford Jr., who also owned a single example of each of the three silver denominations, had purchased the copper 5-unit piece on Feb. 14, 1978, but chose to withhold news of the purchase until January 1980. According to Ford, the copper coin had been discovered by an English coin dealer in a collection held in Paris. Ford did not disclose a purchase price for the piece.

He had acquired the three silver coins from the November 1979 auction by Bowers and Ruddy Galleries of the Johns Hopkins University Collection.

The four Nova Constellatio coins were not offered in the series of auctions of the Ford Collection conducted by Stack’s from 2003 to 2007. The coins were sold by private treaty to an undisclosed party.

Supplies of the souvenir Coin World reprint are limited and copies are available from Whitman at its booth at the ANA World’s Fair of Money on a first-come-first-served basis. ¦