The Joys of Collecting: For some, being there important 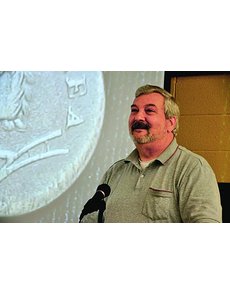 Ray Williams, a familiar figure at coin auctions and conventions, is at the podium giving a talk about New Jersey copper coins of the 1780s.

In today’s Internet age of instant gratification, a lot of business that used to be conducted by attending gallery auctions and coin shows is now being done on the Internet. But are we missing something?

Still, the Internet is here to stay and in some aspects can be more effective than conventions and auctions. Last week I quoted a collector of plantation tokens issued in Central and South America who has found very little at coin shows, as most such tokens are inexpensive and dealers do not stock them, but who has bought hundreds on the Internet — including from sellers in distant lands who do not attend shows anyway.

Further on this subject, one of my correspondents was Ray Williams, a poster example of a “nice guy,” erstwhile president of the Colonial Coin Collectors Club and a longtime hobby booster.

Ray said that as a resident of New Jersey, “I’m in driving distance of your auctions held in New York, Baltimore, and Philadelphia. Seeing other Colonial collectors & dealers bidding is interesting and educational. Plus, I’m friends with many of them and we socialize before and after the auction. This is a very important element the Internet cannot provide!”

Further, he finds that while photographs are helpful, within his specialty of Colonial coins, “Seeing the coin in person at lot viewing can make a big difference in bidding strategy.”

I agree. In his field, standard grading rules do not apply. A coin that appears to be in just Very Good grade can actually be Extremely Fine, if it is a variety from dies with indistinct features or is characteristically weakly struck at the centers.

I had an interesting exchange some time ago with several specialists. I enjoy Vermont coppers of the 1785 to 1788 years and have studied this series carefully. A variety described as Ryder 16 in The State Coinages of New England is always found weak at the centers.

A commercial “grading expert” insisted that a particular example was Very Fine, but I and others familiar with the field studied it carefully and assigned the grade of About Uncirculated.

The bottom line seems to be that the Internet is wonderful and has vastly expanded opportunities for buyers and sellers alike. On the other hand, attending auctions and conventions remains a wonderful experience to see, learn and enjoy the company of the people involved. It is best to use both venues, it seems!

My next show is the Whitman Coins & Collectibles Expo in Baltimore in June. If I am lucky I will see you there!