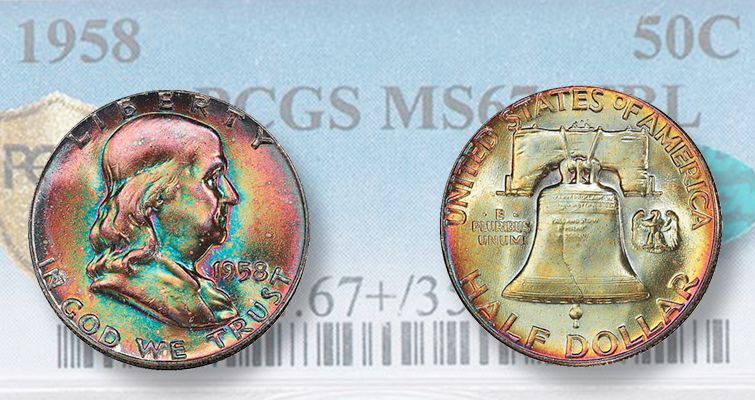 This 1958 Franklin half dollar graded MS-67+ full bell lines by PCGS sold for $129,500 at Legend Rare Coin Auctions’ Regency 28 sale in Las Vegas. The date is common, but the quality and color are extraordinary.

A ridiculously toned 1958 Franklin half dollar that is among the finest known of the entire type brought the house down when it sold for an incredible $129,500 at Legend Rare Coin Auctions’ Sept. 26 to 27 Regency Auction 28 in Las Vegas.

Legend wrote, “We unhesitatingly pronounce this the BEST and wildest 1958 Frankie in existence! EVERYTHING about this coin is mind boggling! EVERYTHING!” before calling it “1000% PERFECT.” Both sides showcased deep color, especially the obverse with its almost cloisonné appearance, featuring jewel tones that verged on neon in their intensity.

The offered coin is one of just two 1958 Franklin half dollars graded Mint State 67+ by Professional Coin Grading Service and it had a green Certified Acceptance Corp. sticker, with no finer examples known. Indeed, within the entire Franklin half dollar series PCGS has graded no finer representatives.

Legend estimated it at $15,000 to $17,500, citing the PCGS Collector’s Universe price of $17,000, but warned bidders, “We can easily see this coin blowing past that long before the sale even starts,” and saying that it could go for “moon money.” It did. Many collectors never expected to see a Franklin half dollar soar past six-figures.

After the auction Legend said that the series has become more popular in the past few years, suggesting, “the market for them is maturing and realizing enough time has passed that they can now be considered a classic series in the annals of American Numismatics.”

On several collector message boards after the sale, sharp-eyed collectors wondered how a coin with several contact marks could get an MS-67+ grade. The PCGS Grading Standards call for an MS-67 coin to be “Very well struck with minor imperfections visible without magnification,” which allows for some “chatter” in the form of isolated contact marks on Franklin’s cheek and hair. PCGS uses plus grades to recognize coins graded between Extremely Fine 45 and Mint State or Proof 68 that exhibit exceptional eye appeal for the grade and “constitute the top 30% for the grade.”

The 1958 Franklin half dollar is a common coin with a mintage of 4 million, and even MS-66 full bell line examples are plentiful, with PCGS grading 388 MS-66 FBL coins that sell for as little as $115 in recent auctions. PCGS has certified just 18 in MS-67 FBL and one of these — with a green CAC sticker — brought $2,232.50 at Stack’s Bowers Galleries’ 2017 American Numismatic Association World’s Fair of Money auctions in Denver. That example had warm, slightly mottled toning and lacked the exceptional eye appeal of the record-setter. 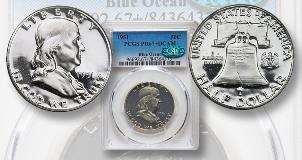 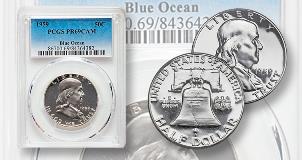 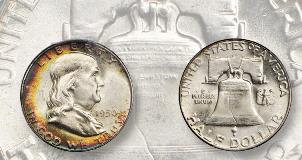