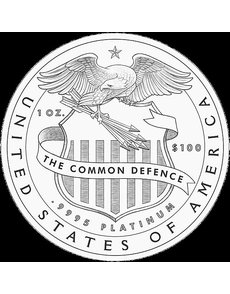 The Commission of Fine Arts recommends this design for the Proof 2013 American Eagle 1-ounce platinum coin, fourth in a series saluting the core concepts embedded in the Preamble to the U.S. Constitution. The 2013 coin celebrates the passage “provide for the common defence.”

An eagle and shield design triumphed over sketches featuring allegorical figures when the Commission of Fine Arts reviewed designs for the reverse of the Proof 2013 American Eagle platinum $100 coin.

The panel’s newest member, New York sculptor Teresita Fernández, voiced concern over how well proposed allegorical figures on some of the 11 designs the commission reviewed would be reproduced on the coin.

As a result, meeting in Washington, D.C., Nov. 17, members recommended a design that she favored. It shows an eagle clutching the arrows of war above a federal shield.

The coin will be the fourth in a series begun in 2009 that salutes the core concepts embedded in the Preamble to the U.S. Constitution. The coin will likely cost nearly $2,000 because of the value of the ounce of platinum it will carry.

The 2013 coin will highlight the requirement that the federal government shall “provide for the common defence,” and uses the spelling that was contained in the original preamble. The phrase is placed on a scroll draped over the shield on the recommended design.

The commission urged the U.S. Mint to move the placement of the required 1 OZ. designation from its current position below the eagle’s right wing at the upper left, to join the inscription .995 PLATINUM, found just below the shield.

The 11 proposed designs are likely to be presented to the Citizens Coinage Advisory Committee for its review at a meeting scheduled for Nov. 29. That panel’s recommendation, along with the commission’s recommendation, will go to Treasury Secretary Timothy Geithner, who will have the final word on the designs.

Ronald Harrigal, division chief of new product design, research and development and acting chief engraver, presented the designs. He said the actual wording from the preamble was used. Many modern sources on the Constitution use the current spelling of “defense” without noting the change.

The Mint offered several designs featuring the Greek goddess of warfare. In one she carries a shield and in another she appears alongside two allegorical figures who represent the executive and legislative branches of government. In a third she appears along with a scroll denoting on one side Congress and the commander in chief on the other.

Another design features two allegorical figures behind a “defence” shield, one holding a sword and the other a book of laws.

Another design shows a classic Liberty cap on pole above a pair of shields and a scroll inscribed LIBERTY. One shield carries the word DECLARE and a quill and scroll to denote Congress’ power to declare war and the other shield shows an eagle’s talon holding arrows below the word DEFEND.

A variation on the two-shield design features a profile of the capped head of Liberty in place of the Liberty cap. This design also lacks the scroll with LIBERTY.

On another design, a full standing figure of Liberty is featured holding a sword on one design while a shield stands nearby. The inscription TO PROVIDE FOR THE COMMON DEFENCE appears to the right of Liberty.

In another design a stern-faced Liberty is shown, sword in her right hand, carrying a billowing American flag in the other hand with the inscription TO PROVIDE FOR THE COMMON DEFENCE positioned along the rim.

A Minuteman, with a book in one hand and a rifle in the other, is depicted against a stylized American flag in one design.

Fernández said she believed it was “quite problematic” whether the Mint could reproduce the allegorical figures from the drawings.

She said design elements such as the cap show in several of the designs would not be clearly reproduced.

As a result, she urged the commission to consider the design it selected as “the clearest” of the proposed images.

Her fellow commissioners agreed, recommending that the “1 oz.” designation be moved from the upper left. Don Everhart, a lead sculptor-engraver from the Philadelphia Mint, agreed that change could be made. ¦