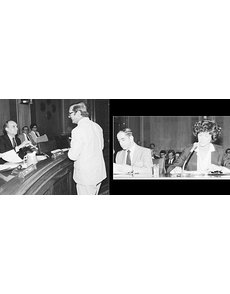 In the image at left above, Sen. Jake Garn, left, chairman of the Senate Banking Committee in 1981, talks with former Treasury Secretary William E. Simon, president of the U.S. Olympic Committee. In the image at right above, U.S. Treasurer Angela “Bay” Buchanan, flanked by the U.S. Mint’s Alan Goldman, testifies against provisions of a Senate coin bill.

With the 1984 Los Angeles Olympic Games just a scant three years away, virtually everyone — Olympic officials, members of Congress, U.S. Treasury officials and coin collectors — was excited about the prospect of the U.S. Mint issuing coins to commemorate the Games.

But, as often happens, the parties were wide apart in their thinking as to mintages, pricing, marketing and beneficiaries.

When Sen. Jake Garn, Republican chairman of the Senate Banking Committee, gaveled a packed July 14, 1981, hearing to order, most Washington handicappers thought approval of companion bills S. 1230 and H.B. 3958, introduced by Sen. Garn and by Rep. Trent Lott, R-Miss., respectively, would be a slam-dunk.

The companion bills called for the issuance of 29 different designs that would include denominations of dollar coins in copper-nickel and 90 percent silver, $50 coins in gold and $100 coins in gold struck in both Uncirculated and Proof, all bearing 1983 and 1984 dates.

Following protocol, Treasurer Angela “Bay” Buchanan was the lead witness. She expressed support for the concept of Olympic coins, but cited problems.

“The Department, however, has serious reservations about the magnitude, scope and nature of S. 1230, and does not consider this bill, as proposed, to be in the best interest of the public and the government,” Buchanan said.

Buchanan expressed Treasury’s opposition to the proposed methods of marketing and distribution, which directed the U.S. Mint to strike all of the coins and then deliver them to the Los Angeles Olympic Organizing Committee for distribution and sale through a marketing entity selected by the LAOOC. With an eye on the clock, the LAOOC had already signed an agreement with an international consortium to market the U.S. Olympic coins. The consortium was formed by three firms: Lazard Freres & Cie, Paris; Lazard Freres & Co., New York; and Occidental Petroleum Corp., Los Angeles. American industrialist Armand Hammer, one of the richest men in the world, headed Occidental Petroleum.

Buchanan noted that the proposed bill would interfere with Treasury’s “obligation to the American people to assure … the proper and equitable distribution of its products.” She sounded the alarm, reminding Congress that no commemorative coins had been issued in the previous 30 years because they “often resulted in the exploitation of the public for private gain ... improper handling of proceeds from a coin of the realm, inaccuracy or poor taste in advertising and inequities to the public in pricing and distribution.”

On that day, two leaders within the numismatic community supported the Treasury’s position. They were American Numismatic Association President George D. Hatie, and Chester L. Krause, founder of Krause Publications.