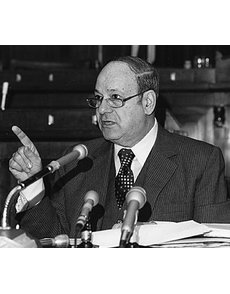 Lobbyists working on behalf of the Olympic community and powerful members of Congress who were backing the 29-coin bill that called for turning over the marketing to the private sector had not factored into their plans opposition from the collector community. Hobby leaders vigorously questioned Olympic officials’ projected sales numbers and their marketing plan that would steer most of the profits to the private sector, not the Olympic committees for use in building facilities in which U.S. athletes could train.

During the fall of 1981, the Olympic lobbyists and private marketers regrouped and floated the idea of scaling back from 29 coins to 25. The “idea” materialized in the form of an amendment to S. 1230, which sought four gold $100 coins, four gold $50 coins, 16 silver $10 coins, and one copper-nickel clad $1 coin.

By early December, Olympic officials were growing anxious. They needed to know how to plan their budgets for the Olympic Games.

With little fanfare, the Senate Banking Committee gave its stamp of approval to the amended bill and on Dec. 9 it sailed through the U.S. Senate.

Before the 97th Congress recessed for the Christmas holidays, the amended S. 1230 was communicated to the House of Representatives and was referred to the House Committee on Banking, Finance and Urban Affairs.

Following procedure, the Senate-approved bill was referred to the subcommittee with jurisdiction over coins, the Subcommittee on Consumer Affairs and Coinage.

The chairman of the subcommittee was Rep. Frank D. Annunzio, D-Ill. Annunzio had introduced his own Olympic coin bill on June 11, 1981, that would authorize one Olympic silver dollar that was to be struck and marketed by the U.S. Mint. Annunzio’s subcommittee had taken no action on his bill. When the amended Senate bill landed in his subcommittee, the veteran lawmaker and strategist had things right where he wanted them — under his control. Before leaving for Christmas break, Annunzio quietly asked the General Accounting Office, the investigative arm of Congress, to examine the Senate-approved bill as well as his bill.

On April 6, 1982, when Annunzio gaveled the House Subcommittee on Consumer Affairs and Coinage hearing on all Olympic coinage proposals to order, it suddenly become clear that the most important battle to determine the scope and marketing of Olympic coins had just begun. And Annunzio, who would become known as the “Coin Czar,” was prepared with a formidable arsenal at his command.

beth deisher was editor of Coin World for 27 of the 31 years she was on the publication’s staff. She may be contacted at Beth@CashInYourCoins-Book.com.