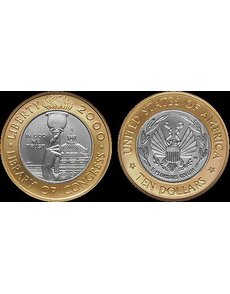 To mark the sesquicentennial of the abolition of slavery in America, platinum and gold ringed-bimetallic $50, gold $20 and silver dollar commemorative coins would be struck in 2016 if legislation is approved by Congress and signed into law.

Rep. Danny K. Davis, D-Ill., introduced H.R. 2633 on July 9 to mark the 2015 sesquicentennial of the adoption of the 13th Amendment to the U.S. Constitution abolishing slavery.

The U.S. Mint has struck ringed-bimetallic commemorative coins before — the 2000 Library of Congress platinum and gold $10 coins.

The weight and diameter specific in the legislation is a change from the specifications for the standard gold double eagle: a weight of 33.47 grams and a diameter of 34.29 millimeters.

The silver dollars sought for this program would be unique as a commemorative coin. They would have a fineness of .999 rather than .900 as found for all other commemorative dollars. The fineness, weight of 31.03 grams and diameter of 40.6 millimeters specified in the legislation are the same as for the American Eagle 1-ounce silver bullion coins. Mintage would be limited to 500,000 coins.

A surcharge of $10 per coin for all denominations produced under this legislation would be given to the Smithsonian National Museum of African American History and Culture. Typical commemorative coin legislation assigns different surcharges per coin denomination.

Designs are to be emblematic of the 13th Amendment and the abolishment of slavery in America. Each coin would feature the inscription 1865-2015 along with the standard inscriptions mandated by law.

In addition, the legislation would require the designs to be “based on the economic contributions of slavery, and include images of the pathway from slavery to freedom.”

The bill also states that design elements on the $20 coin may be in high relief. Also, the $50 coin may include on the obverse “an illustration of Columbia or similar figure representing Liberty, the female representation of America.” On the reverse “a single eagle, and a set of stars on one or both sides ...” may be depicted.

Designs would be selected by the Treasury secretary after consultation with the Commission of Fine Arts and the Citizens Coinage Advisory Committee.

The legislation, if approved by Congress and signed into law by the president, calls for coins to be struck during the calendar year beginning Jan. 1, 2016, “except that the secretary may initiate sales of such coins, without issuance, before such date.”

The legislation was sent to the House Financial Services Committee. ¦