Commem to celebrate the power of friends 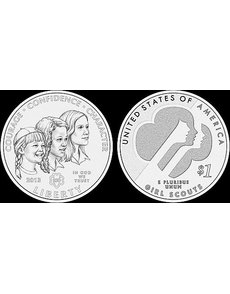 The Girl Scout mission is condensed on the obverse of the commemorative coin with the words COURAGE, CONFIDENCE and CHARACTER. The reverse has the denomination of $1 and the Girl Scout logo highlighting the diversity among its members.

The power of friendship and leadership for young women will be celebrated with the release in 2013 of $1 silver commemorative coins marking the 100th anniversary of the Girl Scouts USA.

The coin designs were officially unveiled Sept. 22 during a Girl Scout gala dinner and fundraiser at the Hall of State at the State Fair of Texas in Dallas, according to Anna Maria Chávez, Girl Scouts of the USA Chief Executive Officer.

Chávez told Coin World in an interview on Sept. 19 that in 2009 more than 40,000 messages, in the form of email and telephone calls, were sent to members of Congress by current and former Girl Scouts, parents and other supporters asking them to vote for legislation authorizing the coins.

Congress heard those messages loud and clear and approved legislation authorizing production of not more than 350,000 silver dollars dated 2013 with designs “emblematic of the centennial of the Girl Scouts of the United States of America.”

The law authorized a $10 surcharge per coin to be distributed to the Girl Scouts of the United States of America to be made available for Girl Scout program development and implementation.

Some of the funds will be used to renovate the birthplace of Girl Scouts founder Juliette Gordon Low in Savannah, Ga., and to create new programs such as financial literacy to become part of the training offered to Girl Scouts.

Chávez said scouting officials will be using social media to get the word out about the coins that will go on sale in 2013.

“Investing in girls is the best investment people can make in this country,” she said. “They are a valuable asset for the future and we need them to opt-into leadership. We provide a safe place to learn and supporting adults. We allow girls to discover things around them. Our goal is to serve more girls.”

“Girl Scouts USA worked very closely with the U.S. Mint to provide information to their artists,” Chávez said. “They shared that Girl Scouts value diversity. Our mission [statement] is ‘Girl Scouting builds girls of courage, confidence, and character, who make the world a better place’.”

Chávez said there were 10 designs created by U.S. Mint artists. The final design was selected by the secretary of the Treasury after consulting with the Girl Scouts of the United States of America and the Commission of Fine Arts. The Citizens Coinage Advisory Committee also reviewed the designs.

The obverse of the coin depicts three girls representing the different levels of Girl Scout membership. The date 2013 and the Girl Scout trefoil logo with numeral 100 superimposed are below the portraits. The words COURAGE, CONFIDENCE and CHARACTER, taken from the Girl Scout mission statement, are above the portraits.

The reverse has the denomination of $1, E PLURIBUS UNUM, UNITED STATES OF AMERICA and the Girl Scout logo highlighting the diversity among its members.

Chávez has been crisscrossing the country in the 10 months since she became CEO to promote Girl Scouts and their centennial celebration.

Chávez is among the 59 million women who were once Girl Scouts. She was born in Arizona and said what she learned about friendship and leadership in her Girl Scout troop “gave me the courage to go to law school.”

She served as head of the Girl Scouts of Southwest Texas in 2009 and in August 2011 was elected as CEO and took office in November. She is now part of the leadership responsible for the 3.2 million members who serve in 236,000 troops throughout the United States and its territories. Girls in more than 92 countries participate in USA Girl Scouts Overseas. ¦