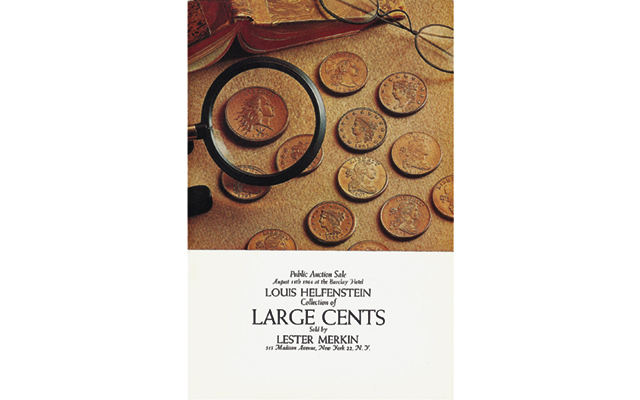 The cover of the first full color auction catalog produced by Lester Merkin for the 1964 sale of Helfenstein’s large cent collection.

Last month we discussed how Augustus Goodyear Heaton’s Mint Marks changed how numismatists collected American coins. This month we will see how one dealer revolutionized how coins are sold at auction.

That dealer was Lester Merkin, a man better remembered as a musician than as a numismatist; a talented saxophonist, he played in several big bands.

Merkin appreciated the beauty of rare coins, becoming a collector about 1950, a “vest pocket dealer” in 1956 and a full time coin merchant in 1958. By chance, this was a century after pioneers in the field like Edward Cogan and W. Elliot Woodward began selling coins for a living. The paper covers of their auction catalogs all looked alike, overrun by thickets of descriptive verbiage, and without a single illustration. This made sense during the last half of the 19th century, an era when ink was cheap, but illustrations were expensive.

As the 20th century dawned, it became cheaper to reproduce images in catalogs, but coin dealers were cost-conscious, and rarely did more than place an occasional black-and-white engraving on their covers.

At mid-century, the flamboyant B. Max Mehl of Fort Worth, Texas, experimented with a few deluxe covers, but they were just colorful card stock, usually with a small photographic illustration of a coin from the collection.

As the 1960s dawned, the majority of coin auction catalogs looked just like Cogan’s and Woodward’s of a century before: heavy on typography, light on illustrations, and overall, drab as dishwater. But then, Merkin met Louis Helfenstein, and everything changed.

Helfenstein’s large cent collection was the kind of copper “that dreams are made on” — of 332 coins, only three graded lower than About Uncirculated! Merkin decided that this whiz-bang collection deserved better than a ho-hum catalog, and resolved to produce the first cover with a full color photograph, featuring some of Helfenstein’s gems, all placed into an artistic setting, including his gem 1793 Flowing Hair, Wreath cent. The use of a magnifying glass makes the 1793 Wreath cent look as if it might pop off the photo at any moment.

This cover set a new standard for numismatic auction catalogs. Never again could a major collection be offered without being showcased by a full color “grand format” cover.

Catalogs look the way they do today because, 50 years ago, Merkin decided to go all-out for Helfenstein. Ironically, though he started a color photograph revolution, Merkin warned against placing too much emphasis on photography: “The sharpest photographs … fail to convey the sheer visual impact, the breathtaking beauty of these Helfenstein large cents. They speak for themselves, muting all other media, and must be seen to be appreciated.”

Original paperbound copies of Merkin’s Helfenstein catalog are scarce and sell for about $50.

A special post-sale hardcover edition of only 100 copies, with a mounted photograph of the game-changing color cover, will cost at least $100 — but is worth every cent!