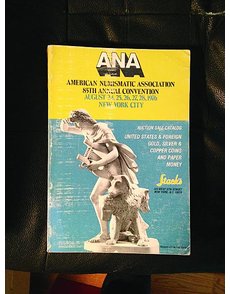 Stack’s 1976 ANA auction included Colonial coinage from the collections of the Massachusetts Historical Society, the Museum of Fine Arts in Boston and the estate of Carl Wurtzbach.

The American Numismatic Association auction has traditionally been one of the biggest sales of the year, a showcase event for important coins. While most ANA auctions can boast at least a few noteworthy Colonial-era rarities, only a few ANA sale catalogs are must-haves for a Colonial reference library.

John Adams’ reference, United States Numismatic Literature, Volume II, rates every ANA sale conducted between 1907, when dealer Ben Green held the first such event, and 1950. The Adams reference rates auctions on an A through C- basis in a variety of numismatic specialties. Just one of those sales merited an A for Colonials: the 1947 event by Numismatic Gallery, the partnership of Abe Kosoff and Abner Kreisberg. Held in Buffalo, N.Y., the 1947 ANA auction included the collection of Robert R. Prann of Puerto Rico, an advanced Colonial specialist. Prann’s consignment included six Sommer Island coins, two New England shillings, a New England sixpence, a Willow Tree sixpence, a George Clinton copper, two Standish Barry threepences, six Higley coppers and more than a hundred other nice Colonials.

The cataloging was meager and only a few lots were photographed. In fact, among the highlights just mentioned, the only ones to get pictures were a single Sommer Islands shilling and the George Clinton copper.

Five years later, the ANA convention in New York featured the best cataloged and most comprehensive ANA auction yet. The 1952 ANA sale, catalogued by New Netherlands Coin Co. and three other firms, is best known today for including Homer Downing’s large cents. Its superb Colonials are not as well known: a Willow Tree shilling and several beautiful Pine Tree shillings, a 1785 Confederatio copper, a brass Continental dollar, a 1792 Roman Head cent, and two 1792 Getz patterns, all cataloged by the team of John J. Ford Jr. and Walter Breen.

The ANA show was back in New York City in 1976, and perhaps the most important Colonial offering of any ANA sale hit the block in the sale by Stack’s. It included pieces from the Massachusetts Historical Society, the Museum of Fine Arts in Boston and the estate of Carl Wurtzbach. The rarities alone make this a must-have for Colonial enthusiasts: a St. Patrick farthing in gold, a 1714 Gloucester token, a New Jersey Immunis Columbia, a Standing Indian/New York Arms copper, and more. The Colonial section represented just the first 130 lots, but what a 130 lots they were!

Perhaps the most noteworthy collection of Colonials in a more modern ANA auction was the 2010 offering of the Edward Roehrs Collection of regulated gold coins by Heritage Auctions, the largest offering of such material ever sold.