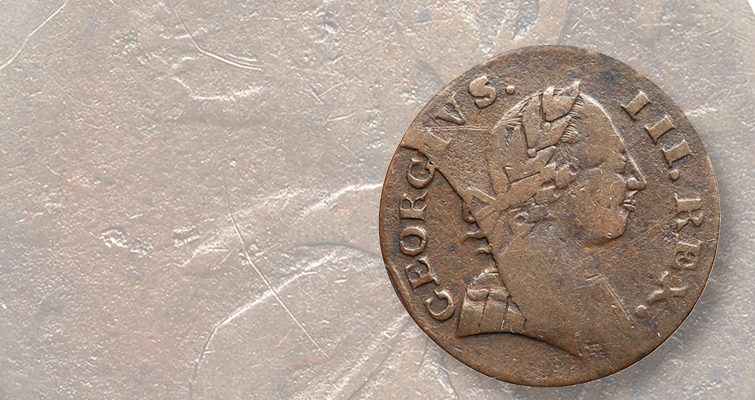 A second known example of a Vlack 25-87C variety of 1787 Machin’s Mills halfpenny identified by an early coppers expert is consigned to a Feb. 18 auction by Ira & Larry Goldberg Auctioneers.

A second known example of a Vlack 25-87C variety of 1787 Machin’s Mills halfpenny has been identified and will be offered for the first time in a Feb. 18 auction by Ira & Larry Goldberg Auctioneers.

The variety was identified by noted copper specialist Bob Grellman from McCawley & Grellman, while cataloging lots for the upcoming auction.

Grellman said the rare variety was in a small consignment of otherwise nondescript coins.

The variety reflects the fifth known use of the reverse die in a die marriage.

The key diagnostic is the obverse die crack. The initial die crack, according to Grellman, likely started at the rim over the I in GEORGIVS and then extended down to the shoulder and turned right across the bust, exiting to the rim at the bust tip. The lower end of the crack is indistinct on both known examples. The current discovery is a later die state, indicated by a retained cud or die break at the end, according to Grellman. On this current discovery, a small triangle of planchet metal is positioned over the I in GEORGIVS.

The current discovery, according to Grellman, grades Fine 15 in details with clean surfaces. The discovery piece from 2012 reported in the journal of the Colonial Coin Collectors Club exhibits Very Fine 25 details but with porosity on both sides.

The Machin’s Mills pieces represent production from a private mint after the New York State Legislature nixed a contract competition for state coinage. After the state legislature rejected all contract proposals on April 18, 1787, Thomas Machin and five business partners established what was tantamount to an illegal coining operation striking pieces that mimicked British halfpence.

The cataloging system for the series is from Robert Vlack’s Early American Coins, the second edition of which was published in 1965.

The obverse of the piece just identified depicts a bust of King George III, and the reverse depicts a seated figure of Britannia. 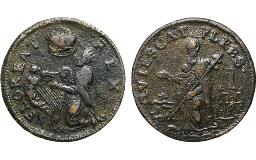 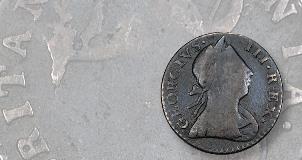 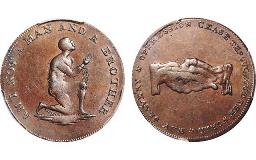