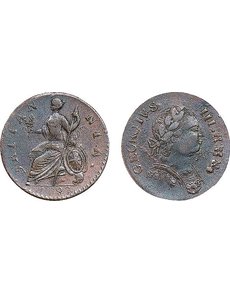 This 1787 halfpenny, struck in Newburgh, N.Y., is a circulating imitation of an English type last struck in 1775.

In the field of early American coins, unlike most numismatic specialties, counterfeits aren’t anathema. Colonial collectors have always sought to include counterfeits — circulating counterfeits — to their cabinets, right alongside the legally authorized coin they duplicated.

Today, collectors tend to call these “contemporary counterfeits,” i.e., contemporary to the era of the originals. I’ve never liked the term. I’ve always preferred the term “circulating counterfeits,” since it’s more descriptive and less apt to confuse someone new to the field.

Circulating counterfeits are fascinating. Not only do they suggest the freewheeling economy and legal structures of the Colonial and Confederation eras, but they also serve as a useful commentary on just what was circulating in the era. After all, no counterfeiter copies what’s not common; the goal is for their products to blend in without a second thought.

Sometimes the workmanship of the fakes, in terms of both die engraving and actual minting technology, is as good as or better than the products the fakes copy. Other times, their crudity lends a charm and whimsical intrigue that attracts modern collectors.

The Machin’s Mills halfpence series is perhaps the best known of the early American circulating counterfeits. Struck in Newburgh, N.Y., the coppers weren’t technically illegal in the nascent United States — after all, they imitated the coins of the king we’d just cast off as a tyrant.

The copper halfpence produced by Capt. Thomas Machin, a British deserter who ended up joining the Continentals, can be classed as both counterfeits and imitations, in modern parlance.

A counterfeit is a coin that exactly copies a known authentic issue. Since the Royal Mint issued 1747 halfpence, the 1747-dated pieces struck by Machin are properly termed counterfeits.

The 1787 Machin’s Mills halfpence, on the other hand, are better described as imitations. Their types and legends copy those of the real England halfpence of the era, but the date doesn’t. As a modern comparison, would a 1952 Winged Liberty Head dime fake be a counterfeit? Not exactly. Thus, the terms imitation and counterfeit are both useful to describe issues like this.

Did Machin know that no genuine English halfpence were coined in 1787? It’s doubtful. He was many things, but numismatist probably wasn’t one of them. Today, we coin geeks fuss over a lot of things that just wouldn’t have mattered at the time. To a mechanic like Machin, the idea of collecting die varieties would have had all the drama and interest that collecting lug nuts by thread pattern might have to a numismatist.