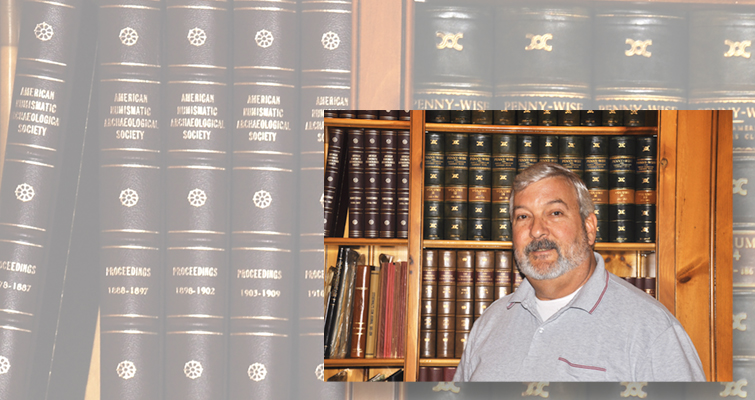 Ray Williams, a colonial specialist from Trenton, N.J., is an electronic technician by profession. He started collecting coins at age 11 while earning the Coin Collecting Merit Badge in Boy Scouts. His pursuit of colonial coins started in 1988 and became a passion in 1991.

Q: What draws you to New Jersey’s copper coinage?

A: There are a number of reasons that New Jersey Coppers fascinate me. The enthusiasm of New Jersey Copper collector John Griffee was contagious and addictive, starting in 1991. Building a personal library, membership in American Numismatic Association, American Numismatic Society, Colonial Coin Collectors Club and Early American Coppers, and subscribing to Colonial Newsletter just fed this addiction. Building a circle of friends sharing my collecting interests helped maintain my enthusiasm these past 25 years. I reside in New Jersey, so the coins are part of my local history, of which I just can’t learn enough.

Q: Is there a particular coin or die marriage of New Jersey copper that eludes you?

A: Of the approximately 145 known New Jersey Copper varieties, there are about 55 my collection lacks. If I were to pick the dream coin I’m missing, it would be what is called the “Date Under Plow Beam” variety. The positioning of the date makes them distinctively different from all other varieties. Several have become available since I started collecting, but I am a collector on a budget and without the finances to obtain one. That being said, you don’t need to be a millionaire to enjoy collecting colonials. Circulated (even well worn) colonials still possess the romance of having been used by our ancestors wearing tricorn hats and having buckles on their shoes. I decided long ago that I would collect the colonial coins I could afford.

Q: What kind of research was involved in co-writing Grading Guide for Early American Copper Coins?

A: Working on this reference was fun. I didn’t know my coauthors at all until we worked on the book. I still haven’t met one in person. My section of the book was with respect to the coinages of the Confederation period (1785 to 1788). The text introducing this section was mostly from personal experience over the years. I can’t express how important it is to read the text before jumping to the photographs to grade coins. The most difficult part was locating ideal images to represent the grades of the different coinage series. But as the Beatles said, “I get by with a little help from my friends.”

Q: What advice would you give to a collector who has never collected Colonial coinage but is considering doing so?

A: This question would take a feature length article to answer. But, in brief, read through the first 90 pages of the Red Book. See what colonials capture your eye and your hobby budget. Keep in mind that the circulating coinage in our British American colonies also includes coins from Spanish American colonies, and Old World countries on the other side of the Atlantic. Once you decide what to collect, then join Colonial Coin Collectors Club (C4, www.colonialcoins.org) and borrow the books from the library that pertain to your interests. Acquire a library as you acquire coins. Purchase from reputable dealers and auction houses. Don’t spend more than you are comfortable spending. And have FUN!