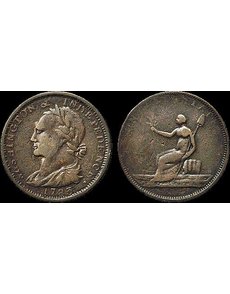 As a writer, spelling typos are the bane of my existence. Typing at something close to 60 words per minute, the occasional missed flick of a fingertip is expected. But how hard is it to get a two- or three- word coin legend correct when punching a die can take all day?

Judging from the many early American coins with misspelled legends, getting things right can be pretty tough. Colonial-era dies were produced by painstakingly using one individual punch after another to create the intended legend.

The letter punches were tiny and, but for the diminutive character at the tip, identical. Mixing them up was bound to happen on occasion. These sorts of errors are seen most often on Connecticut coppers, where varieties are recorded with such errors as AUCTOBI, AUCIORI and AUCTOPI for AUCTORI; CONNLC instead of CONNEC; INDL for INDE; and ET LIR and ET IIB instead of ET LIB.

My personal favorites among the Connecticut coppers are the varieties with CONNFC for CONNEC and FNDE for INDE. Why would an F punch be anywhere near a Connecticut die, you may wonder? They were struck in the same building in New Haven as the 1787 Fugio coppers, thus the CONNFC and FNDE varieties are not just misspellings, but important evidence of the relationship between these two major Confederation-era series.

Other state copper series were hardly immune from similar issues. New Jersey copper producers at the Morristown Mint missed the second letter U on the PLURIBS reverse. The PLUKIBUS and PLURIRUS varieties of the New Jersey coppers were probably caused by broken punches, rather than the use of entirely wrong letters.

On the Vermont coppers, the wide variance of the spelling of the state’s name — VERMONTS, VERMONTIS or VERMONTENSIUM — suggests indecisive Latin more than bad orthography. Latin was pretty tricky for American die cutters in the 1780s. NOVA CONSTELLATIO is correct, but NOVA CONSTELATIO falls just short.

And who can blame the diecutter for the Cecil Calvert Maryland series for replacing MVLTIPLICAMINI with MVLTILICAMINI instead? In this case, it looks like the error was detected early, as just two examples are known of the Maryland sixpence with the misspelling.