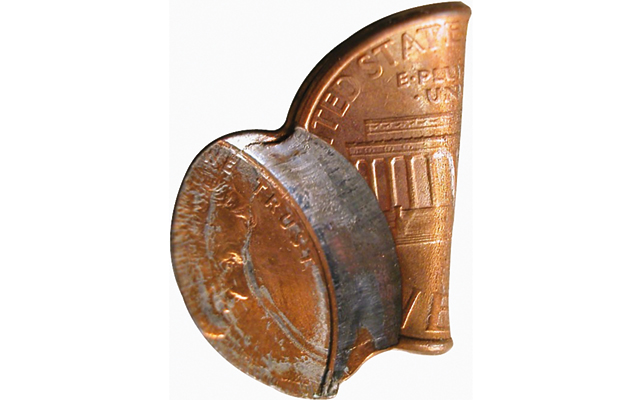 This 2001 cent received a normal first strike and a foldover, uniface second strike. This specimen displays an axial fold and asymmetrical positioning of the composite tongue. 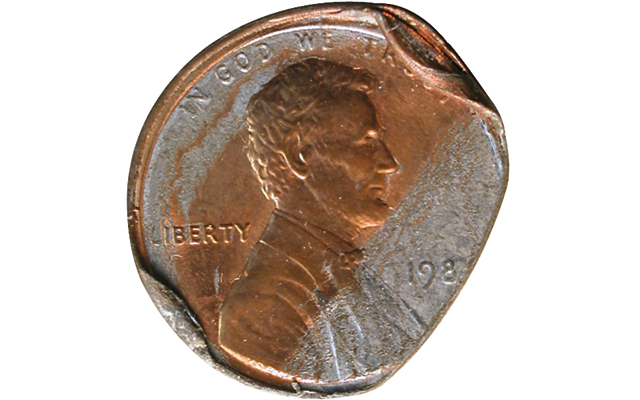 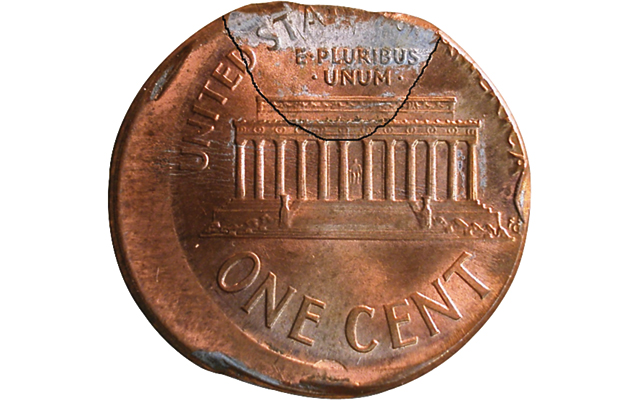 The reverse face of this 1999 cent shows an extreme paraxial fold that has left a small tongue fused to the back of the reverse face (black outline). The opposite pole shows an edge strike. 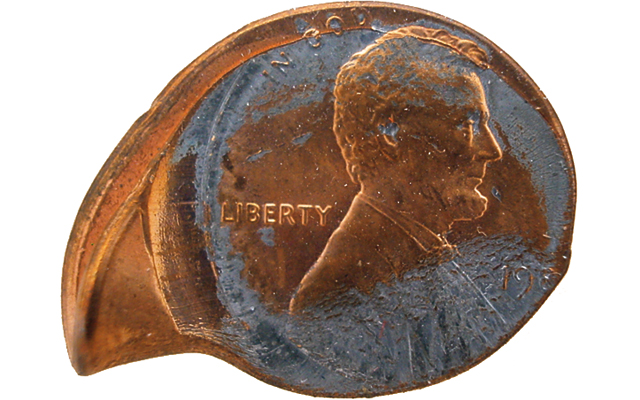 This 198x cent folded toward the striking chamber when struck on-edge.

A foldover strike occurs when a planchet or coin is struck on edge and folds from the impact. Any number of scenarios can produce this rare vertical positioning of the planchet.

It can enter the striking chamber spinning or rolling on its edge. It can be kicked into a vertical position when thrust against a coin left behind in the striking chamber. An airborne planchet can even be caught in midflight by the descending hammer die.

The most recent foldover strikes I know of are dated 2001, so this seems to be an obsolete error type that modern high-speed Schuler presses used at United States Mint facilities are incapable of generating.

As might be expected of such a fluke event, the appearance of a foldover strike is highly variable. Variability includes the distance of the bend from the planchet’s equator, the positioning of the struck tongue along the convex edge of the “taco,” the size of the tongue, and the relative contributions of the tongue’s two fused flaps.

Also variable is the presence, size, and patency of any “loop” that forms as the two halves of the taco are pinched together.

Appearance is, in turn, dependent on thoroughly random starting conditions. These include the planchet’s contact point on the anvil die face and whether the bend is directed toward or away from the striking chamber.

Also important is the planchet’s angular orientation to the circular die face (tangential, oblique, or orthogonal). Stated another way, the silhouette of a peripherally placed planchet would respectively appear as a circle, an oval, or a vertical line when viewed from across the striking chamber. Frequent slippage of the planchet during the downstroke of the hammer adds an additional level of complexity.

Our first example is a 2001 Lincoln cent that received a normal first strike and a foldover second strike. It’s evident that the vertically positioned coin was peripherally located because the second letter of WE is preserved on the edge next to the tongue. The bend pointed away from the striking chamber (producing a patent loop) and is perfectly symmetrical (an axial or midline fold).

On the composite tongue, the obverse flap is fractionally smaller than the reverse flap. The tongue is asymmetrically positioned along the convex edge of the taco.

This example does document some consistent patterns that can be detected in double- and triple-struck foldover cents. In such errors, the outside of the fold always shows the Lincoln Memorial.

If the material strength of the coin was uniform within and between both faces, we would expect a 1:1 ratio between the reverse and obverse designs showing on the outside of the fold. I therefore suspect that the design of Lincoln’s bust leaves the obverse face a little weaker than the reverse face when a compressive force is applied to the edge.

All double- and triple-struck foldover strikes I’ve encountered also happen to be uniface strikes (struck against an underlying planchet). This isn’t too unexpected, as most ordinary double strikes also show a uniface second strike.

Our second example — struck sometime in the 1980s, but with the full date not visible — was also peripherally positioned, but in this case it bent toward the striking chamber. Tangentially oriented, it folded in half so perfectly that it was struck in-collar. This is one of only two in-collar foldover strikes I’ve encountered.

Many foldover strikes show an asymmetrical, or “paraxial” fold that will vary from slight to extreme. In cases of extreme asymmetry, like the illustrated 1999 Lincoln cent, the coin will feature a small flap fused to the body of the coin and an edge strike at the opposite pole.

A few coins develop paraxial folds at opposite poles (a so-called “Z-fold”). In such cases you’ll find one small flap fused to the reverse face and a second fused to the obverse face.

Our last example was struck with the planchet’s edge resting near the anvil die’s southern perimeter. It folded toward the striking chamber, producing a very large struck tongue. The bend is slightly paraxial and the obverse flap is slightly smaller than the reverse flap to which it is fused.

Due to its oblique orientation when struck, the composite tongue is asymmetrically positioned along the convex edge of the taco, leaving one corner unaffected by the strike.

In all the preceding examples the two flaps that contribute to the composite tongue are fused. In a few foldover strikes the flaps do not fuse.