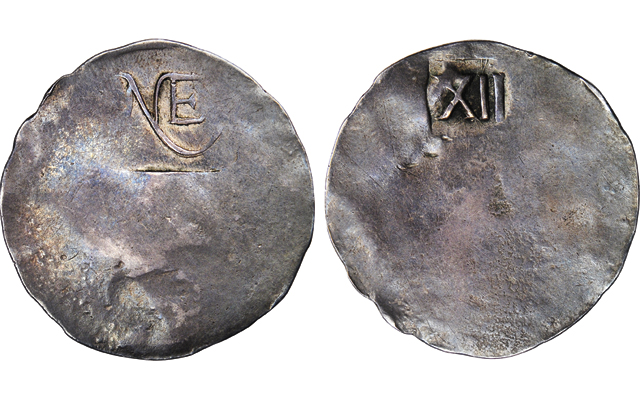 Above is one of six (1652) New England shillings in the Henry P. Kendall Foundation Collection to be offered in 2015 by Stack’s Bowers Galleries.

It’s going to be a banner year for Colonial collectors.

Many folks thought 2014 would be tough to top, with many of Eric P. Newman’s Colonial coins hitting the market in May and November auctions after being off the market for decades, but the exciting news of the sale of two old-time cabinets has Colonial collectors ready for more.

First on the auction calendar is Part One of the collection of Donald G. Partrick, a longtime colonial enthusiast who was a dominating bidder at many of the marquee auctions of the 1970s and 1980s. Partrick acquired many of the great rarities sold at the sales of the Garrett Collection and Roper Collection, in 1979 to 1980 and 1983, respectively, including the unique THE WHEELE GOES ROUND Higley copper, the finest known Birch copper cent, and more. Partrick continued adding to his world-class assemblage through the sales of the John Ford Collection.

The first offering of Partrick coins, including his Massachusetts silver, Higley coppers, 1792 patterns and Vermont coppers, will be offered by Heritage Auctions in January at the Florida United Numismatists show in Orlando.

The announcement at the Whitman Expo in Baltimore of the Partrick sale follows word that an advanced collection formed by an anonymous collector will be sold by Stacks Bowers Galleries in March 2015. Sold as the Henry P. Kendall Foundation Collection, the sale will include the largest offering of Massachusetts silver coins ever sold, along with other Colonial-era rarities acquired primarily in the 1960s and 1970s.

Guided by Lester Merkin and beginning in earnest at the legendary 1966 C.H. Stearns sale, the Kendall Foundation Collection placed the final jewel in its crown by acquiring the only Willow Tree threepence in private hands at the 2006 sale of John Ford’s Massachusetts silver coins. The Kendall Foundation Collection focused on Massachusetts silver coinage, setting a record that stood for years when $75,000 was bid for the Garrett New England sixpence in 1980. Other rarities, including several 1792 patterns, Sommers Island Hogge money, a George Clinton copper, and more will also be offered.

What will Colonial collectors do when an even dozen NE shillings are sold in just over two months’ time? What about a pair of 1792 Silver Center cents, three 1792 Birch cents, eight Higley coppers, three Chalmers sixpences, along with more Willow Tree shillings and other Massachusetts silver coins than anyone’s ever seen in such a short time?