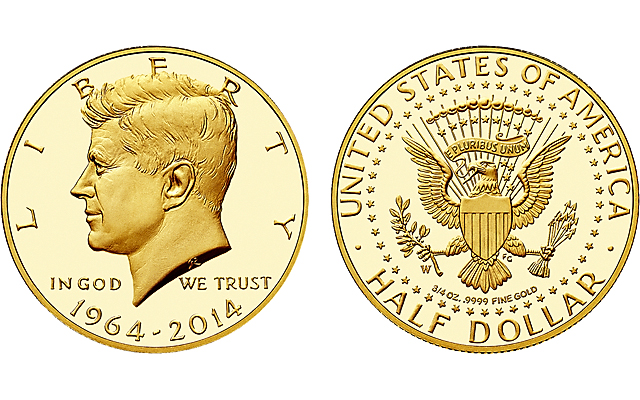 Collectors seeking to buy the Proof 1964-2014-W Kennedy 50th Anniversary gold half dollar in-person Aug. 5 will have to show proof they are 18 years of age or older.

Collectors seeking to purchase the Proof 1964-2014-W Kennedy 50th Anniversary gold half dollar during the American Numismatic Association World’s Fair of Money Aug. 5 to 9 in Rosemont, Ill., and at all Mint over-the-counter points of sale, will be restricted to those individuals 18 years of age or older, U.S. Mint officials announced July 21.

Proof of age may be required at the time of purchase.

The coins go on sale at the show at 11 a.m. Central Time, which corresponds to noon Eastern Time, and 10 a.m. Mountain Time.

The U.S. Mint has a sales center on the first floor of its headquarters at 801 Ninth Ave. NW in Washington, D.C., as well as contracted sales outlets at the Denver Mint and Philadelphia Mint.

In-person sales are to be restricted to two per person, J. Marc Landry, the U.S. Mint's acting associate director of sales and marketing, said July 16.

An announcement will be made by Mint officials at the show as to where collectors should line up. Mint officials are attempting to avoid a rush or havingcustomers to wait in line for hours ahead of time.

Coin World is awaiting an answer from Mint officials on how the bureau might accommodate physically handicapped individuals attending the show who might have difficulty getting to the assigned line-up area once the announcement is made.