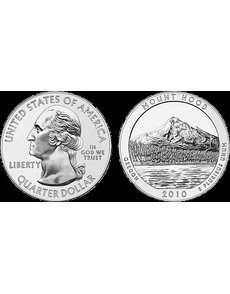 After a tumultuous start, the 2010 America the Beautiful 5-ounce silver coins are now beginning to reach collector hands and demand for the pieces in the secondary market is high.

American Precious Metals Exchange, one of the United States Mint’s authorized purchasers, has begun delivering sets of America the Beautiful 5-ounce silver bullion coins purchased by customers before the Mint cut off sales on Dec. 6. APMEX is honoring those orders at the new prices in line with the Mint’s requirements (described later in this article).

A visit to the APMEX site (www.apmex.com) shows that the firm’s allotment of 5-piece sets is listed as being currently out of stock.

When contacted by Coin World, APMEX Chief Executive Officer Michael Haynes stated that “several hundred sets” have been delivered, but that the firm is currently interpreting the Mint’s regulations in order to remain in compliance with the new rules before it will sell the remainder of its allotment to the public. No date has yet been set for when this will occur.

The Web site of Coins ’N Things (atb.cntofma.com) of Bridgewater, Mass., another authorized purchaser, states that it is accepting order “requests” for the coins beginning on Jan. 17, 2011.

In addition to the direct sales from some of the authorized purchasers, single America the Beautiful 5-ounce silver bullion coins and five-piece sets are already being sold on the secondary market, primarily through the Internet auction site eBay.

Completed transactions on eBay show that sales for the coins appear to be strong, both for coins in hand and for presales of coins anticipated for delivery. For example, “Buy-It-Now” prices of $2,499, $2,195 and $2,325 for on-hand five-piece sets were recorded. Examples of coins sold singly in open bidding include a Grand Canyon National Park coin selling for $549.99, a Hot Springs National Park coin reaching $479.99, and a Mount Hood National Forest coin selling for $499.

These secondary selling prices recorded on eBay represent a tremendous premium over the actual bullion value of the coins. Taking into account the closing New York silver spot price of $30.31 per ounce on Tuesday, Dec. 28, each 5-ounce silver bullion coin possesses a silver value of slightly more than $150.

Original sale prices by authorized purchasers are considerably lower than secondary market prices, generally at around $900 per set.

On Dec. 6, the United States Mint cut off sales of the coins to its authorized purchasers after a number of complaints regarding price gouging.

On Dec. 10, the U.S. Mint announced new requirements for authorized purchasers who wished to participate in the program. It specified that each authorized purchaser must sell to the public all of the 5-ounce silver bullion coins it acquires from the Mint; must sell the coins at a price “no higher” than 10 percent above the acquisition price; establish and enforce a limit of one coin of each design for each household; may not sell the coins, either directly or indirectly, to officers or employees of their companies; and must allow the Mint to examine and audit all of the authorized purchaser’s books, records, documents and other data to ensure that they have complied with the Mint’s terms and conditions.

In addition, the authorized purchasers cannot sell the coins outside of the United States.

Authorized purchasers can acquire each of the five 2010 coins at the fixed spot price of silver (times five ounces), plus a premium of $9.75 per coin. A total of 33,000 of each of the five designs is available.

Authorized purchasers choosing to participate are required to order a minimum of 2,000 coins, and may order additional increments of 100 coins per increment, up to 3,000 coins per design.

As reported in Coin World in its Jan. 10 issue, nine of the Mint’s 11 select distributors have chosen to participate in the program. ¦