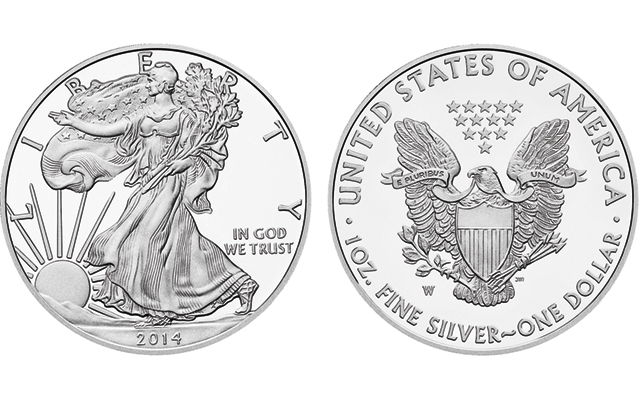 The United States Mint has recorded sales of 586,587 Proof 2014-W American Eagle 1-ounce silver dollar in the single-coin option, and 5,318 pieces in the 2014 Congratulations set.

Collectors still are buying anything silver from the United States Mint, including the Proof 2014-W American Eagle 1-ounce silver dollar.

The same coin is also available packaged in the Congratulations set, a packaging option the Mint introduced in 2013 for gift-giving purposes. The 2014 Congratulations set went on sale Jan. 14 for $54.95. Latest sales figures indicate 5,318 of the 2014 sets have sold.

The final mintages for the coins will be the totals of sales of silver Proof American Eagles from 2013 and 2014 in all of their product options.

Examples of the single Proof 2013-W and 2014-W American Eagle silver dollars are being offered on eBay in the $56 to $60 range in their original U.S. Mint packaging.

Certified examples of either year’s coins are being offered in the $90 and up range for examples graded and encapsulated Proof 70, Ultra Cameo, First Releases, by Numismatic Guaranty Corp., or certified Proof 70, Deep Cameo, First Strikes, by Professional Coin Grading Service.