Collectors' Clearinghouse: Many causes of mushy details on coins 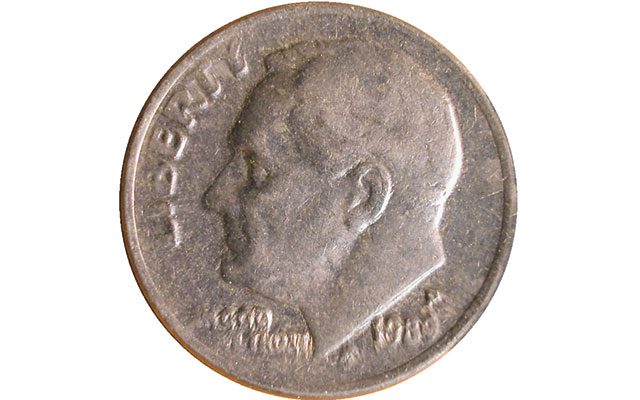 The obverse face of this 1989-P Roosevelt dime was struck by a very worn die. The motto IN GOD WE TRUST is nearly illegible. Images by Mike Diamond. 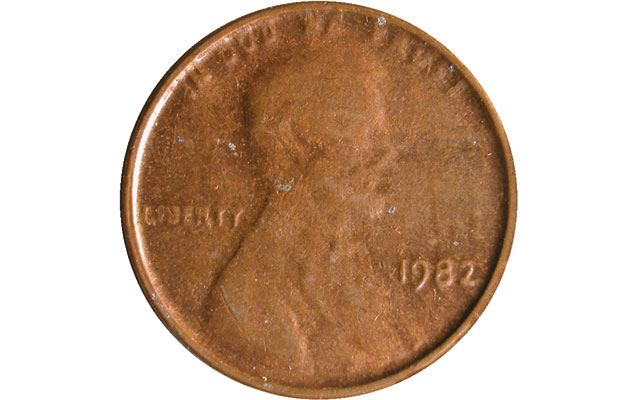 This 1982 Lincoln cent was struck through a very late-stage obverse die cap. A strong ghost of the obverse design has bled through the thin floor of the cap. 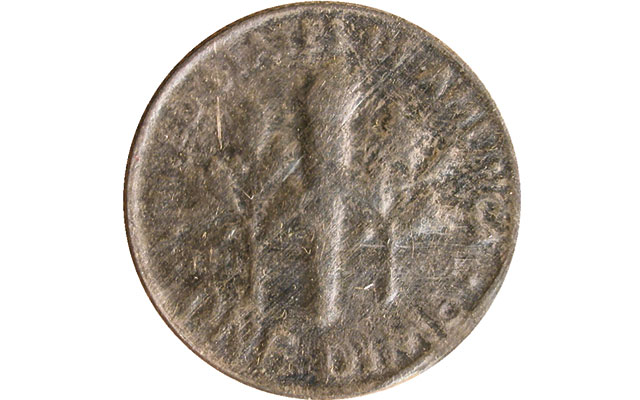 The reverse face of this 1967 Roosevelt dime was struck through a detached copper-nickel clad layer. 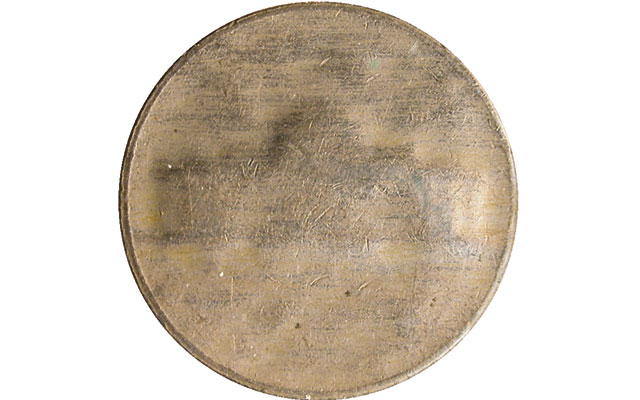 The reverse face of this 1956 Jefferson 5-cent coin was struck through a rolled-thin or split planchet. A raised ghost of Monticello is the only recognizable feature. 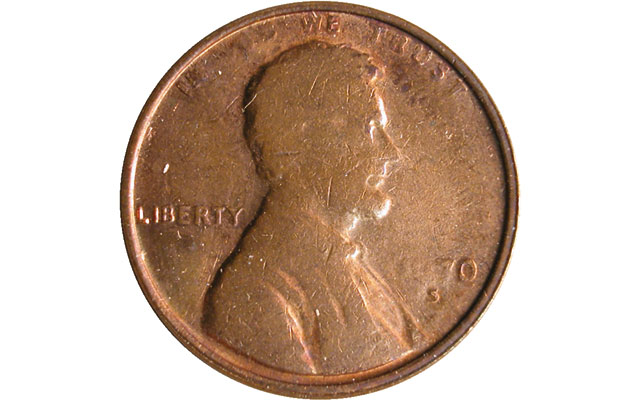 This 1970-S Lincoln cent was struck through an uneven layer of “grease.” 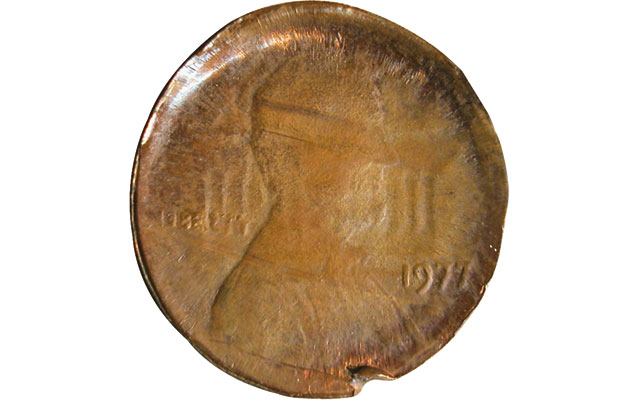 This 1977 Lincoln cent was struck on a split planchet, with the first strike die-struck on both faces. The second strike was a uniface strike (full indent), with the coin partly surrounded by the collar (a partial collar error). The second strike left the obverse face with a flattened, indistinct design, as well as an incuse ghost of the Lincoln Memorial.

Victory, it is said, has many fathers. The same may be said of a mushy design. In considering any blurred design, it is essential to distinguish among the numerous potential causes.

The most common cause of a mushy design is a worn die. In the course of striking hundreds of thousands of planchets, the die face is remodeled, leaving its design elements puffy and with fewer fine details. The illustrated 1989-P Roosevelt dime was struck by a very worn die. It would be more formally described as a Very Late Die State. Letters and numbers are bloated and poorly defined. Another sign of die deterioration is the presence of radial flow lines.

Generic capped die strikes can appear deceptively similar to a worn die. As it strikes dozens of planchets, the floor of a die cap gets progressively thinner, allowing more and more of the design to bleed through. The illustrated 1982 Lincoln cent was struck through a very late-stage die cap. The entire design is present, though uniformly mushy. Subtle wrinkles extend radially from the date into the field. Wrinkles, folds, and other surface irregularities constitute key diagnostics for this error type.

As with a late-stage die cap, any thin layer of metal interposed between a die and a planchet will generate a mushy design. For example, the reverse face of this 1967 Roosevelt dime was struck through a copper-nickel clad layer that separated from another planchet. Since clad layers have a consistent thickness, the clarity of the design is equally predictable.

Split planchets and planchets punched out of rolled-thin stock will also leave behind a blurred design. These thin planchets will sometimes remain in place and serve as die caps, becoming thinner in the process. The reverse face of a 1956 Jefferson 5-cent coin was struck through an abnormally thin planchet that allowed only a blurred ghost of Monticello to bleed through. The smooth surface texture leaves us no way to determine if the coin was struck against a rolled-thin planchet or the smooth face of a split planchet.

Another familiar source of blurred features is a thin coating of die fill (“grease”). The illustrated 1970-S Lincoln cent was struck through grease on both faces, with the obverse face shown here. The uneven strength of the design and the absence of wrinkles distinguishes this grease strike from a capped die strike.

An initially clear, die-struck design can be rendered indistinct by a second strike against a planchet or other circular wafer. The 1977 Lincoln cent shown here started out as split planchet (1.58 grams) that was die-struck on both faces. It remained behind in the striking chamber as a second planchet of presumably normal thickness was fed in on top of it. When the two discs were struck together, it left the bottom coin with a flattened, indistinct obverse design. The top coin was left with a mirror brockage of the obverse design on its reverse face.

Occurring in isolation, the various error types described above can sometimes be confused with each other. The situation gets much more confusing when these errors are combined. I have, for example, seen coins struck by late-stage die caps that were also covered by a thin layer of grease.