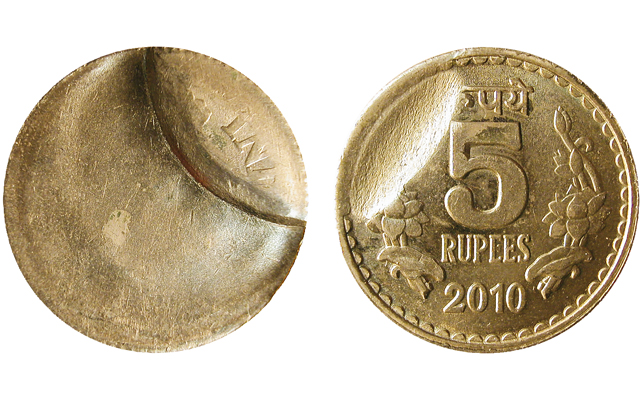 This 2010 India 5-rupee coin was struck through a 5-rupee planchet with a curved clip. Coin metal bulged through the gap between clip and collar to form a dramatic extrusion strike. 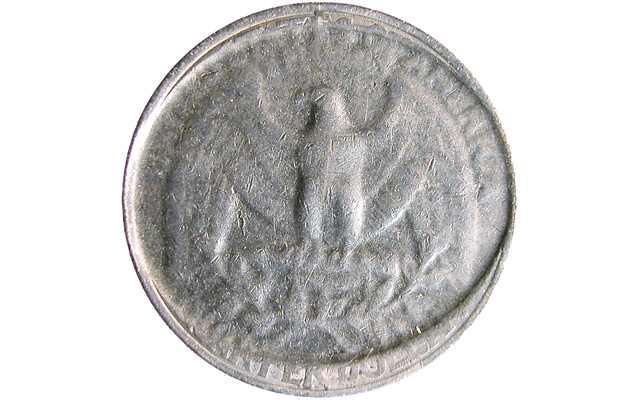 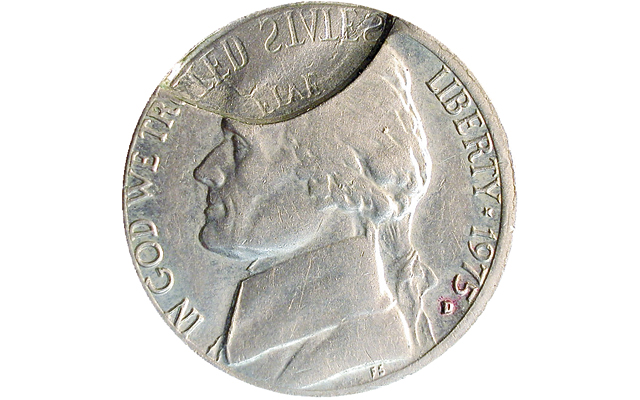 A tiny elliptical clip Jefferson 5-cent coin is probably responsible for the aligned partial brockage seen on the obverse face of this 1975-D 5-cent piece. Note the brockaged design details from the other coin. 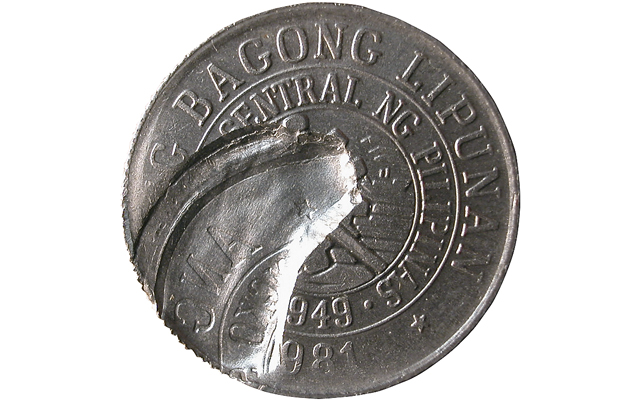 This 1981 Phillipines 10-sentimo coin was struck through a flipped-over struck fragment that left behind a horn-shaped brockage.

Ordinary indents and partial brockages are respectively generated by planchets and coins. These circular discs of metal naturally leave behind indentations with a smoothly curved, convex internal margin. The situation is quite different when the object involved is a clipped planchet or a coin struck on such a planchet.

The illustrated 2010 5-rupee coin from India was struck through a clipped planchet on its obverse face. In this case, the obstructing planchet had a curved clip, the most common kind.

Since the obverse face of Indian coins is usually struck by the anvil die, it would appear that a clipped planchet was fed beneath a normal planchet represented by the illustrated example. Both planchets were struck fully within the collar. Had the bottom planchet not been clipped, this error would have been classified as an in-collar uniface strike.

A bonus feature is the presence of a dramatic extrusion strike. During the strike, coin metal bulged into the gap between the bottom planchet and the collar, simultaneously moving toward the anvil die and away from the hammer (reverse) die. The apex of the bulge contacted the anvil die, producing a small oval of die-struck design that includes portions of the letters IND. A deep, featureless pucker appears in the same location on the reverse face.

Not all coins struck through similarly clipped planchets will show an extrusion strike. A set of “Goldilocks” conditions must exist. The clip mustn’t be too large or too small, and the planchet mustn’t be too thick or too thin. At 6 grams, 23 millimeters wide, and 1.9 millimeters thick, this nickel-brass planchet is a much better candidate for an extrusion strike than the older copper-nickel planchet (1992 to 2004), which weighed a whopping 9 grams.

Effective striking pressure (baseline ram pressure boosted by the double thickness involved) also must be just right. Too high and there’s no pucker — just a normal die-struck design. Too low and there’s no design on either face in the area of the normal planchet that is exposed by the clip.

Among domestic coins, fully centered indents from curved clip planchets have been observed among 5-cent coins and dimes.

I have also seen indents from curved clip planchets that were struck off-center. In these cases, one tip of the clipped planchet leaves behind a horn-shaped indentation.

A number of domestic cents are known that were indented by cents struck on bowtie clips composed of copper-nickel clad dime material.

Any sort of clip can leave its impression in a coin. Shown here is the reverse of a 1998-D Washington quarter dollar that was struck though an elliptical copper-nickel clad layer. This layer had earlier separated from an elliptical clip quarter dollar blank or planchet and arrived in the striking chamber beneath a normal planchet (this coin). The design struck through the clad layer shows a uniform mushiness. Two thin crescents of normal, die-struck design can be seen above and below the shallow oval recess generated by the thin elliptical layer.

A much smaller elliptical object is responsible for the “aligned” partial brockage seen on the obverse of a 1975-D Jefferson 5-cent coin. It appears that a small elliptical planchet arrived by itself in the striking chamber and settled against the collar at 11:00. The tiny planchet was struck and affixed itself to the hammer (obverse) die. A second, normal planchet (this coin) was fed beneath the elliptical coin and the two were struck together, producing a brockage whose incuse elements are precisely aligned with the corresponding raised elements on the reverse face.

A distinct impression of the design rim, and the absence of horizontal lipping, would seem to argue against alternative explanations for this brockage. An aligned partial brockage from an off-center (partial) die cap is generally associated with horizontal lipping of the coin’s edge and typically lacks a design rim. An elliptical strike clip generally shows evidence of a widened shoulder lateral to the design.

With other types of clips it becomes increasingly difficult to distinguish bona fide examples from coins struck through “coin shrapnel” (pieces torn off during strikes), broken machine parts, and unidentified fragments.

Miscellaneous foreign objects can also leave impressions that resemble curved and elliptical clips. Shown here is a 1981 Philippines 10-sentimo coin that was struck through a struck fragment that left behind a horn-shaped, flipover brockage.

Coin World’s Collectors’ Clearinghouse department does not accept coins or other items for examination. Materials sent to Clearinghouse will be returned unexamined. Please address all Clearinghouse inquiries to cweditor@coinworld.com or to 800-673-8311, Ext. 172.