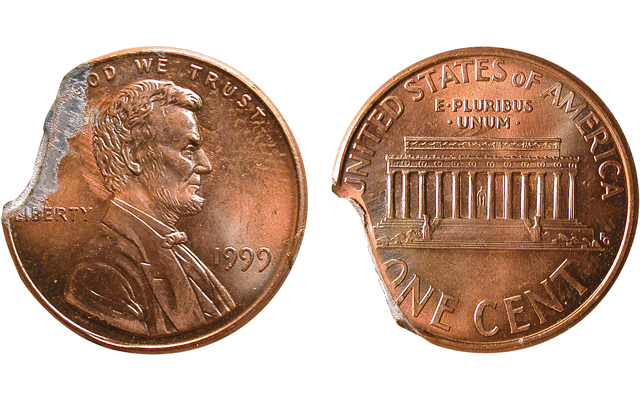 The left side of this copper-plated zinc 1999 Lincoln cent was pinched off just before the strike. 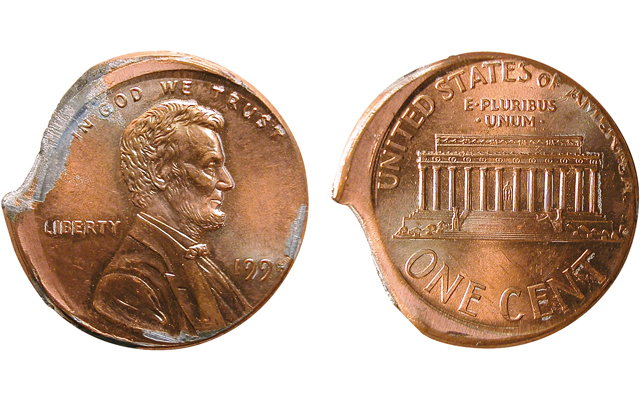 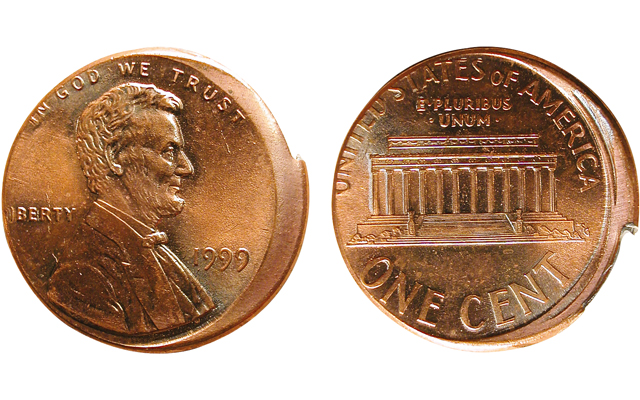 The edge of this off-center cent was carved away by an unidentified machine part after entering the coinage press. 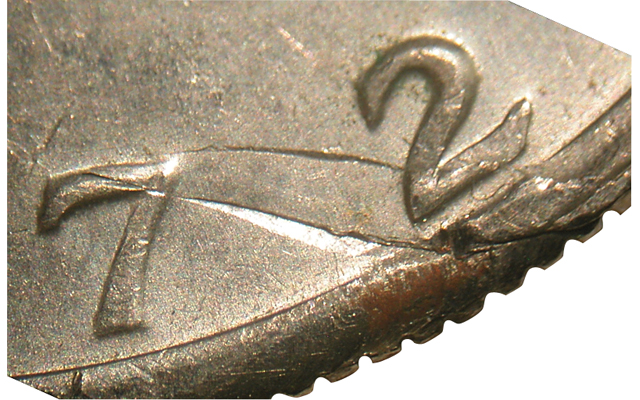 A fang-like rim burr appears at 5:00 on the obverse face of a 1972 half dollar. The metal spur was undoubtedly torn up just before the strike.

Pre-strike planchet damage is infinitely variable in its severity, extent, location, and appearance. Yet, from time to time, consistent patterns do emerge. When similar-looking damage is found repeatedly in the same area, it stands to reason that the same machine part is responsible and that the damage was probably inflicted within the press and immediately before the strike.

An example of such damage is seen on two 1999 cents, one of which was struck in-collar and the other struck off-center. The left side of the planchet was pinched and sheared off, exposing the zinc core along the edge of the deficit and on the adjacent obverse surface.

While the two cents were struck by different die pairs, it doesn’t necessarily mean that they were struck in two different presses, however, as dies are replaced at least once a day in a typical press.

I have seen at least half a dozen additional 1999 cents bearing the same type of pre-strike planchet damage in the same location. It’s important to understand that a planchet that is damaged before it arrives in the press will enter the striking chamber in a random orientation. This pertains to both its clock position and which surface faces the hammer die. Consistent positioning of pre-strike damage can presumably only occur within the coinage press, while the planchet is being cradled in the feeder and presented to whatever is generating the damage. I also don’t think it’s a coincidence that both cents show die damage on the reverse face. Whatever was damaging these planchets also probably scarred the die face.

A third off-center 1999 cent shows a different form of pre-strike planchet damage. In this case the edge of the planchet was neatly carved away by some machine part. The zinc core is completely exposed along the edge of the deficit. I’ve seen other 1999 cents with the exact same damage, although the positioning isn’t quite as consistent as the cents whose perimeter was pinched off. Still, the location of the damage is far from random, as it mostly occurs on the upper right side, as seen here.

That being the case, I’m pretty sure the damage was inflicted just before the strike, near or within the striking chamber. Prosaic forms of pre-strike damage also support the idea of a last-second mishap. The illustrated 1972 half dollar displays a struck-in rim burr on the obverse face at 5:00. It was long argued that rim burrs — especially the classic, fang-like form shown here — were generated in the upset mill. But this hypothesis is undermined by the fact that the vast majority of rim burrs appear on the face struck by the hammer die, instead of being evenly distributed between hammer and anvil die.

The nonrandom positioning of rim burrs was reinforced for me several years ago when error dealer Fred Weinberg sent me a large group of Anthony dollars, each of which had an atypical, symmetrical rim burr in the same clock position on the obverse face. All of the coins were struck by the same die pair. This pattern could only have emerged at the last possible moment before the strike.