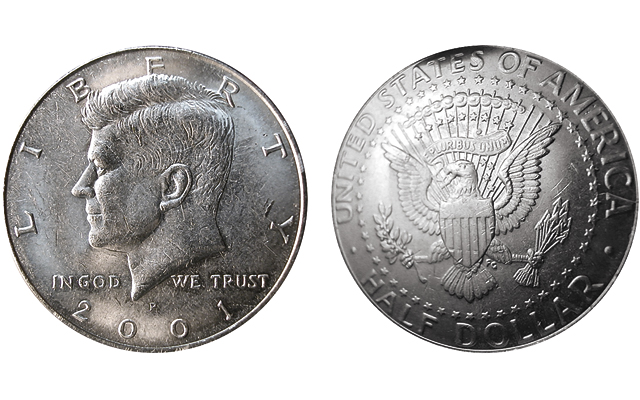 This 2001-P Kennedy half dollar is one of many struck by a pair of reciprocally deformed dies. The coin’s reverse face bulges out while the obverse face is slightly sunken, relative to a normal half dollar of the same date. 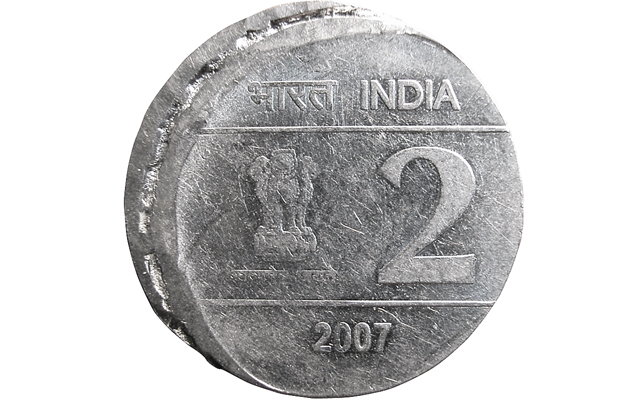 Half the perimeter of this slightly off-center India 2007 2-rupee coin shows reciprocal die deformation. The left side of the obverse field (struck by the anvil die) is abnormally concave. The anvil die and the surrounding collar were also horizontally misaligned. 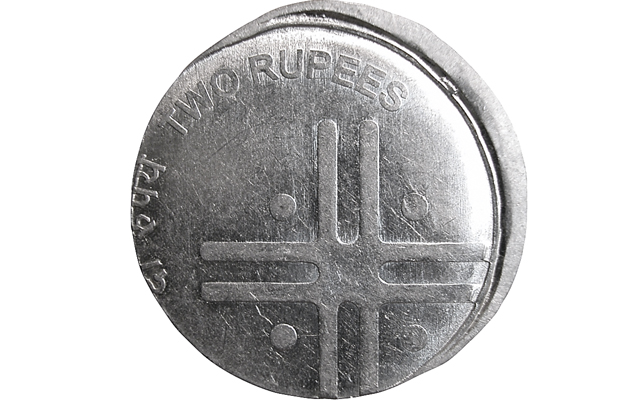 The corresponding right side of the reverse field of the Indian 2-rupee coin (struck by the hammer die) is abnormally convex along its perimeter. The die face in this area was inflected downward, terminating in a sharp edge.

Reciprocal die deformation is a rare phenomenon in which one die face sinks in while the other bulges out in a complementary fashion.

Until recently, I knew of only one die pair afflicted in this manner. It produced a large group of 2001-P Kennedy half dollars, one of which is shown here. The central two-thirds of the reverse die sank in while the central portion of the obverse die bulged out less impressively, producing coins with a convex/concave cross-sectional profile (Collectors’ Clearinghouse, Sept. 16, 2013).

I recently came across a very different case of reciprocal die deformation in an off-center 2007 India 2-rupee coin minted at the Calcutta facility. Here deformation affects about 180 degrees of each die’s perimeter.

Normal Indian 2-rupee coins of this design display a nearly flat peripheral field, so the exaggerated curvature seen on this coin is quite abnormal. The left side of the obverse die (bearing the denomination and the Ashoka lion) retreated or was pushed in, leaving the die with a convex cross-sectional profile in this area. The coin itself therefore has a correspondingly concave cross-sectional profile in this same area.

Elsewhere on the coin we find evidence of a major press calamity. The coin’s obverse field is more laterally positioned than the reverse field, leaving the unstruck portion of the planchet wider on the obverse face. This suggests that the anvil die and its surrounding collar were horizontally misaligned. This rare alignment error can only occur if the collar breaks free of its moorings or breaks apart, freeing the anvil die from its confinement. The terribly ragged collar scar is consistent with such an error as it indicates that the collar was seriously damaged.

I suspect that a massive impact from the side drove the collar into the anvil die neck, causing downwarping along the left side of that die face. This same impact may have forced the right side of the hammer die to protrude, provided that the hammer die was at the lowest point of its downstroke (and therefore within the collar). It seems less likely that the hammer die was damaged while situated above the collar. A final possibility is that the hammer die escaped the impact but instead conformed quickly to the deformation already present on the anvil die through the medium of the relatively large (26.75 millimeters), relatively thin (5.8 grams), stainless steel 2-rupee planchets. This curious scenario would probably hinge on the dies being softer than normal.

This may indeed have been the case. One would think that die steel would shatter before it would undergo the sort of drastic deformation seen here. The fact that the dies didn’t shatter suggests that the die steel was unusually malleable and that this set the stage for the subsequent, impact-induced distortion.